Bagoo (バクウ Bakuu), appearing in Klonoa: Empire of Dreams, is the advisor of Emperor Jillius. He is the one who accompanied Jillius as they charge Klonoa of disobeying the imperial law of not dreaming.

Bagoo's true form is a large dragon-like beast with a body made completely out of a grey ooze that wears a horned mask. The mask comes in three different colors and expressions, and can continually rotate itself to change. The colors/emotions are red (anger), yellow (joy), and blue (sorrow). Bagoo's weak point is his heart, which is shown to be a spinning, white sun-shaped symbol.

Bagoo served as the minister of Emperor Jillius, accompanying the king at all times. When Klonoa broke the imperial law by dreaming, Bagoo was present with Emperor Jillius as they charged the boy for disobeying the law and openly defying it. Jillius, instead of punishing Klonoa there and then, offered him a challenge to defeat the four great monsters that were wreaking havoc on the land, and Klonoa would be set free. Klonoa agreed to do the task, and Bagoo watched the guards guide the boy away all the while snickering that Klonoa would soon learn his 'folly'.

After Klonoa defeated Jillius in battle, the wounded emperor revealed that he was the one that left several clues in the form of the dreams that the people who turned into monsters had, bringing Klonoa and Huepow back to the castle. Bagoo soon appeared, and stated that he is the one behind the monsters in the kingdom, revealing himself as the King of Despair (ぜつぼうの魔王 Zetsubou no Maou). He was the cause of Jillius' chronic insomnia, and his plan was to steal everyone's dreams and transform them into monsters, creating his very own kingdom in the process while manipulating Jillius into transforming his empire into an empire of despair. During this confrontation, Bagoo's shadow assumes his true monstrous form and peels itself off of the floor behind him. Bagoo announces that he shall transform Klonoa and Huepow into monsters as well, prompting them to engage him in battle. Eventually, Klonoa defeated Bagoo, freeing Emperor Jillius from his insomnia.

Bagoo made a cameo appearance in Tat's ending. Instead of being scared of Leorina and Tat attempting to steal his money, the evil minister burst with laughter when he saw that Leorina's face was painted in Tat's vertical black and white pattern as part of a lost bet. 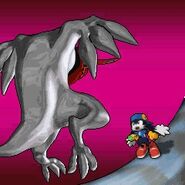 Retrieved from "https://klonoa.fandom.com/wiki/Bagoo?oldid=10211"
Community content is available under CC-BY-SA unless otherwise noted.