Baguji the Wise, also known as Baguji or Master Baguji, is a prophet who is one of the supporting characters in Klonoa 2: Lunatea's Veil. He had forseen the coming of the Dream Traveler, Klonoa, and soon gives him, Lolo, and Popka advice and instructing them which land to go to next.

Baguji was a wise seer known throughout Lunatea, knowing when certain events are going to take place and when or where someone is going to arrive.

Being a prophet, Baguji had the ability to see into the future and sense whatever is happening nearby.

Baguji was the one who foretold Klonoa's arrival in the Sea of Tears and sent Lolo and Popka there to find the Dream Traveller. Once they retrieved him, the group returned to Baguji's Island where the prophet explained to Klonoa about the world of Lunatea being in danger due to the fifth forbidden kingdom set to emerge. When Klonoa agreed to help, Baguji instructed the trio to each of the four kingdoms to retrieve their Elements that would be the key to saving Lunatea.

As soon as Klonoa, Lolo, and Popka embarked on their journey to Mira-Mira, Baguji stated to himself about Klonoa's future being veiled to him. Without a word, he stood up from his position and walked to the other side of his island out of sight, soon to disappear.

During the confrontation between the King of Sorrow, the King revealed that he had used Baguji as an illusion to lead Klonoa with false prophecies and saviors. 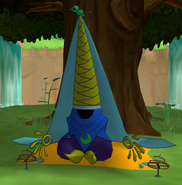 Retrieved from "https://klonoa.fandom.com/wiki/Baguji_the_Wise?oldid=9820"
Community content is available under CC-BY-SA unless otherwise noted.