Baladium is a large, dragonfly-cobralike monster sent by Joka to destroy Klonoa after retrieving the Moon Pendant from the hands of Klonoa's guardian, Granpa. He appears in Klonoa: Door to Phantomile and its Wii Remake.

The appearance of Baladium is that of a humongous dragonfly with several features of a cobra, including the eye patterns on his hood, his ribbed underside and strange petal-like features attached to the tip of his tail. Baladium's six slender wings, seemingly completely detached from the main body, change colour according to the attack he is about to perform, as well as making several different motions with them too. Baladium also bears two red pupil-less eyes, and a long beak very much like that of a bird. On the inside of his hood are eight colored markings, his weak point and the indicator of what attacks he still has at his disposal. These marking can be destroyed by slinging an inflated enemy towards them, ensuring they will explode as disappear. One more critical feature of Baladium's appearance is his deep ocean blue back skin, bearing two further red circles as eyes, like what can be seen on a cobra.

In order to defeat Baladium, you must grab an enemy and throw it at one of his colored crystals to make him lose health. Doing so disables his attacks depending on what the color was. 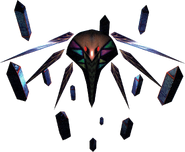