Balue is a stone mason, a recurring character who first appeared in Klonoa: Door to Phantomile. He had a notable role in Klonoa Heroes, and a cameo in Klonoa Beach Volleyball.

Much like the other residents of Breezegale, Balue possesses long, fluffy ears and dog-like features. He is noticeable more rotund than the other inhabitants, as well as brown - whereas all the other Breezegale inhabitants seen by the player are black or blue (Grandpa).

His clothing consists of a yellow hard cap - like those worn on a construction site, grey vest and gloves, dark orange pants and large black boots. He also appears to have wrapped each of his ears with a red band.

At first he seems like he's mean and scary, but Balue is really nice and willing to help whoever needs it. He's a hopeless romantic, and has a major crush on Lephise.

He has a teasing side as he asked Klonoa about his feelings for Lolo though was disappointed by the answer.

Though Balue doesn't have any abilities seen in the game, he is good at building his tower and repair anything that was broken. Notably Balue has one ability is jump much higher into the air (possibly he can jump to the top of his tower in one high-jump), and he can jump down safely from the higher heights without hurting himself but create a boom noise.

Balue was originally the Head Mason at the Gunston Mine who believes in the legend of the Diva Lephise. He first appeared when Klonoa and Huepow were making their way through his tower in Breezegale. He was the one who told the two heroes about Lephise and how he was building the tower they were in to reach her in the Moon Kingdom.

After Ghadius's defeat, Balue joined Granny, King Seadoph, Karal, the High Priest of Coronia, and Pamela at the Moon Kingdom to celebrate Klonoa's victory, and later assisted him in the battle against Nahatomb. Upon seeing Lephise being freed, Balue was seen crying in tears at the sight.

He was sought out by Klonoa after Chipple referenced him as a joke.

He heard Klonoa's reasons for wanting the flower back to give his friend Lolo. Balue tried to tease him by asking if Klonoa liked Lolo, to which the latter said he did as they were friends and Balue was disappointed by the reply. Regardless, his odd training ended up helping Klonoa in his fight with Guntz. 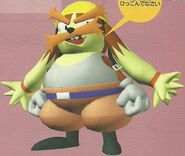 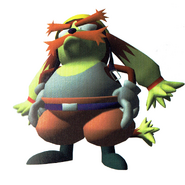 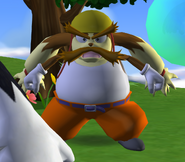 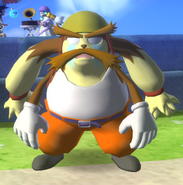 Retrieved from "https://klonoa.fandom.com/wiki/Balue?oldid=12752"
Community content is available under CC-BY-SA unless otherwise noted.