Klonoa: Empire of Dreams
Klonoa 2: Dream Champ Tournament
Klonoa Beach Volleyball
Klonoa Heroes: Legend of the Star Medal
Shippuu Tengoku Kaze no Klonoa
Klonoa: Dream Traveller of Noctis Sol
Chipple (チップル Chippuru) is a kangaroo character who first appeared in Klonoa: Empire of Dreams. He later appeared in Klonoa Beach Volleyball as a playable character, Klonoa 2: Dream Champ Tournament as one of the competitors, and Klonoa Heroes in a supporting role. His latest appearance was in Klonoa: Dream Traveller of Noctis Sol.

Chipple is a kind, insecure, and sensitive kangaroo. Despite his usual jovial attitude, he doesn't have much confidence in his abilities. One example is when he wins the Beach Volleyball tournament, and believes that Klonoa let him win, and restarts the game over and over again. In Empire of Dreams, its revealed that one of his dreams is to be confident and stronger.

He is a very sociable character as he had no problems in befriending Klonoa and the latter's friends Lolo and Popka, despite them being his rivals in the tournament.

Chipple's Special Attack in Klonoa Beach Volleyball. He charges his fist in mid-air and hits the ball over the net. He then goes to the other side of the court and punches his opponents away.

When truly angry, Chipple turns into hulking monster form. He towers overs his enemies and his attacks are more stronger. However, his spiked hands tend to get stuck, allowing enemies to slip past him.

In this game, Chipple is an amateur-boxer from Ghazzaland. He is the first monster that Klonoa has to defeat, and reverts back upon his defeat. Chipple has no recollection of what he has been doing while he was a monster, and only recalls dreaming that he was very strong... and a red mist.

Chipple participates in the Beach Volleyball tournament. If he wins, Chipple believes that Klonoa allowed him to win and restarts the game over and over again until he wins.

Chipple was one of the competitors who participated in the Dream Champ Tournament.

He was reunited with his friend Klonoa and meets the latter's other friends Lolo and Popka who he befriends as well. He lost against Guntz and was turned into a gear by Garlen, but reverts back after Garlen's defeat. Chipple revealed himself to Klonoa after he saved Lolo and thanked him for saving him. He then witnessed Garlen's arrest by Suiryu.

When Klonoa obtained the tournament trophy, Chipple congratulated him on becoming champion and joined him and his friends in celebrating this event as he holds his new trophy.

Klonoa, Popka and Huepow stumbled upon Chipple's dream where the kangaroo is a confident fighter apart from his nice and nervous self. However he has no memory of Klonoa, and Chipple mistakes him for his next opponent in his boxing match. The trio had to get around Chipple to get into the Dream Stream to escape, though Chipple transformed into his monster form when they weren't attempting to fight him. Klonoa, Huepow and Popka managed to jump into the dream stream while avoiding the monster Chipple, not caring if they are disqualified for running away and give him the victory.

Later, he is summoned, alongside Guntz and Nightmare Klonoa, by Tenebrae Hue to crush Klonoa.

The two are good friends with Chipple seeing Klonoa as his idol and seeking to be like him.

They first met in Empire of Dreams, where Klonoa had to fight Chipple while he was being controlled. After Chipple was set free, they became friends and Chipple came to admire Klonoa

In Dream Champ Tournament, they meet again and Chipple was happy to see his old friend and they caught up with Klonoa introducing him to his other friends Lolo and Popka. Chipple told Klonoa that it was an honor to fight with him and aimed to prove himself, as Klonoa wished him luck. However, Chipple lost against Guntz and Klonoa was saddened at this and tried to comfort him. Klonoa was also horrified to learn that the losers would be turned into gears by Garlen. After Klonoa defeated Garlen, Chipple was the first to thank him for returning everyone back to normal again and Klonoa was happy to see him back. Chipple soon congratulated his friend on becoming champion when he was given the tournament trophy and joined him and his friends in celebrating this event as he holds his new trophy.

During Klonoa Heroes, Chipple helped Klonoa in picking a flower he intended to give Lolo.

During Dream Traveller of Noctis Sol, Chipple encounters Klonoa but has no memory of him and even challenged him. Chipple ignored Klonoa's attempts at explaining they were good friends and Klonoa ran away after Chipple attacked him and he was very surprised that he wasn't the meek kangaroo he knew. Klonoa later deduced they were in one of Chipple's old dreams and understood his lack of recollection. At the end, Chipple appeared again to Klonoa who was shocked to see that Tenebrae Hue summoned him, Guntz, and Nightmare Klonoa to destroy him.

Lolo is one of Chipple's new friends in his adventures.

Chipple and Lolo met in Dream Champ Tournament, they got along since they were both friends with Klonoa. Despite being rivals in the games, they were relatively on good terms as she was sad that he lost his match. After the villain was defeated, the pair were celebrating Klonoa becoming champion.

During Klonoa Heroes, they are still friendly as Lolo mentioned him when going to the sky temple and he wished her luck.

In Dream Traveller of Noctis Sol, Chipple encounters Lolo again but has no memory of her and when Tenebrae Hue summoned him, Guntz, and Nightmare Klonoa to destroy her since she sided with Klonoa.

Popka is one of Chipple's new friends from his adventures.

Chipple and Popka first met in Dream Champ Tournament, since they were both friends of Klonoa, they became friends as well before the next round started. In spite of being rivals, they got along and Popka was even sad about him losing. At the end, both watched as Klonoa was honored for saving everyone and being recognized as champion of the tournament.

They met again in Dream Traveller of Noctis Sol, where Popka along with Klonoa and Huepow enter one of Chipple's old dreams. Popka noticed that Chipple didn't recall them and warned Klonoa to watch out for the now confident kangaroo's attacks, only to be scared by a threat from Chipple.

Due to Garlen, Chipple became one of Garlen's victims and made into a gear by him to power his fortress. Fortunately, Chipple was saved by Klonoa and watched as Suiryu arrested the corrupt host for his acts. 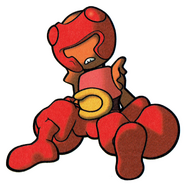 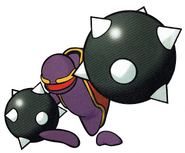 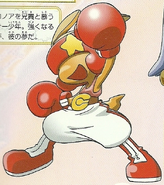 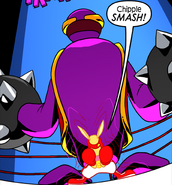