Jillius is mostly a calm and benevolent ruler, despite the bitterness caused for his chronic insomnia. While he considers dreams as a useless waste of time, he stills keeps his appreciation for joyful things like playing or for feelings like love. He is also capable to accept when he is wrong, as the ending of Klonoa: Empire of Dreams shows him quickly lifting his ban on dreams and willing to compensate his people by dedicating his life to make everyone's dreams come true.

Emperor Jillius was the once-benevolent ruler of his kingdom until chronic insomnia caused him to become exceedingly irritable. He is mostly accompanied by his trustworthy advisor, Bagoo. Decreeing that if he couldn't be allowed to dream then no one could, Jillius has since banned dreams within his realm and offered severe penalties for those who have them. When Klonoa was found breaking the sacred law by dreaming, Emperor Jillius himself informed Klonoa of the crime. Instead of punishing Klonoa outright, Jillius offered him a challenge: defeat the four great monsters that were wreaking havoc on the land, and he would be set free.

When Klonoa and Huepow found clues that lead back to the castle of Leljimba, they confronted Emperor Jillius and accused him of being the one who was turning people into monsters. Jillius became enraged, revealing that he was born an emperor and never had a choice to dream like the others. He is then possessed by an unknown force and battled Klonoa, with the Dream Traveller destroying the eyeball-like creature posssessing Jillius. However the battle had left Jillius mortally wounded. He revealed to Klonoa that he had left clues for him so that he would return to Leljimba when they are suddenly confronted by Bagoo, who turned out to be the true cause of Jillius' chronic insomnia and the mastermind behind the act of turning innocent people into monsters.

Klonoa defeated Bagoo, and returned to Emperor Jillius' side. The Emperor apologized for his actions, feeling sorry for himself for not being allowed to dream and that he wasn't a worthy emperor. Jillius then discovered his purpose was to give dreams to his people and protect them. He reached for Klonoa's hand, but supposedly succumbed to his wounds.

Emperor Jillius was awakened by one of his guards, revealing that the events was merely a dream. He stood before the citizens of the Empire of Dreams who wondered why dreaming was forbidden and announced that he would lift his ban on dreams, willing to help his people by dedicating his life to make everyone's dreams come true. As the crowd cheered, Emperor Jillius thanked Klonoa for helping realize his true purpose.

Jillius is pessimistic and is sarcastic in the comic. His insomnia is caused by what he thinks is a haunting ghost, but it ends up being just Klonoa's (incredibly loud) snoring. 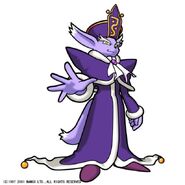 Retrieved from "https://klonoa.fandom.com/wiki/Emperor_Jillius?oldid=12538"
Community content is available under CC-BY-SA unless otherwise noted.