Forlock, also known as Forlock Forest, is a village built around a large tree in Klonoa: Door to Phantomile. The inhabitants are known for their woodworking skills and use things such as wood, nuts, and vines as means to travel between trees.

Forlock Forest is mostly a large forest that surrounds a large tree. The inhabitants use wooden machinery consisting of vines, nuts, and logs to get around. The waters flowing from Jugpot are what provide the trees their nourishment in order for them to thrive. 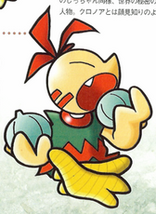 The residents of Forlock seems to consist of tribesman that wield fork-like spears as their weapons. The male inhabitants have a line of red, spikey hair on their heads and on their cheeks, mark two red lines, supposedly showing them as warriors. In the PS1 version of Klonoa: Door to Phantomile, their eyes are closed and slanted, while in the Wii remake, the Forlock inhabitants have their eyes open and they're green. So far, the males have been shown in the games, and the only female seen is the Forlock Chieftess, Granny.

In Forlock greeting, the inhabitants say "Yippie!", while in the Wii remake, this was changed to "Chi-Chiku pah!".

In Klonoa: Door to Phantomile and its Wii Remake, Klonoa and Huepow journeyed to Forlock to see Granny, the Chieftess, about information regarding the legend of the Moon Kingdom. However, when they reached the trees that would take them to Granny, Klonoa and Huepow were informed by a soldier of Jugpot that the water had stopped flowing into Forlock, therefore the trees had withered, preventing access. The two heroes overheard the Jugpot soldier muttering that something was wrong with King of Jugpot, and they wondered if Ghadius was involved. Without hesitation, Klonoa and Huepow traveled to Jugpot to investigate what was wrong with the water flow.

After the events of Jugpot, Karal carried Klonoa and Huepow back to Forlock where the water restored the towering, withered trees back to health, allowing the two heroes to continue their way to Granny. With the help of some of the Forlok residents, Klonoa and Huepow were able to reach the top of Forlock, where Joka was threatening to hurt Granny if she didn't talk what she knew about the Moon Kingdom. When Klonoa and Huepow arrived, the evil clown sent out his monster, Gelg Bolm, to get rid of them all. The two heroes defeated the monster, and saved Granny, who told them about the Moon Kingdom including the mystery behind the Moon Pendant. However, Joka had overheard everything from a distance, including about Klonoa's Granpa having the moon pendant, and made himself known to Klonoa and Huepow before making his way to Breezegale.

Realizing that Granpa was in grave danger, Granny showed Klonoa and Huepow a shortcut to Breezegale where the two heroes quickly made haste to reach the Wind Village before Joka does.

The crest of the Tree Village.

Retrieved from "https://klonoa.fandom.com/wiki/Forlock?oldid=11265"
Community content is available under CC-BY-SA unless otherwise noted.