"I have already been abandoned by the world. This time, it's my turn to throw the world away."
—Ghadius, Klonoa: Door to Phantomile

Ghadius (ガディウス, Gadiusu) is the main antagonist in Klonoa: Door to Phantomile and its Wii remake. He is the Dark King, who wants to obtain the Moon Pendant to open the door to Cress, the Moon Kingdom. Most of the leg-work is done by his sidekick, Joka.

For the most part, Ghadius acts as your traditional villain. When first revealed, his motives do not appear to extend beyond simple revenge and destruction. He displays little emotion, and bursts into foreboding laughter with unpredictable frequency. He has a contemptuous nature towards the people of Phantomile - with the exception of Joka, whom he shows some fondness of. This contempt is revealed to stem from the Phantomilians reliance on light and 'good dreams'. Ghadius, as a King of Darkness and Nightmares, was shunned and forgotten by the people of Phantomile. This led to his belief that, if the world would abandon him, then he, in turn, may abandon the world.

He refers to Klonoa as a 'strange dream'. Aside from Huepow, he is the only character in the game who displays some knowledge of Klonoa's true identity.

Ghadius demonstrates views of both nihilism and narcissism. He disregards and is willing to destroy all of Phantomile simply because he is not allowed to be part of it. He considers his feelings and emotions to be above that of the Phantomilian denizens.

The game is never clear as to the limits and potential of Ghadius's powers, since he appears to be capable of anything, regardless of what the laws of gravity might state.

He may hover above the ground below him, as well as transport himself through space, either via teleportation or flying. He can brainwash and control the people of Phantomile, as seen when he manipulates the minds of King Seadoph and Pamela, doing so alters their appearance and voice.

The inner workings of his cloak are an oddity. He can keep objects inside there, and even uses it to transport himself and Klonoa to an alternate dimension (The Wheel of Woe). This implies the cloak is larger on the inside. He can grow to a size far larger than his usual form, as is seen during the battle with him. Once he has done so, he can create small, teleportation orbs that warp anyone whom comes into contact with them. He can summon dark, spherical projectiles to rain down on Klonoa and fling bullet shaped missiles surrounded by energy at him.

His mask can move independently to his cloak, to some extent - though admittedly he seemingly dies shortly after.

Aptly named the 'Dark King', Ghadius was one of (presumably) five spirits. The Tree Spirit, Water Spirit, Wind Spirit, Light Spirit and The Dark King - Ghadius himself. Whilst Ghadius at the time was not necessarily a force of evil, he was a representation of nightmares and darkness and thus shunned by the inhabitants of Phantomile, who refused to accept these aspects of life. The Light Spirit on the other hand, was revered, worshiped and loved by the people of Phantomile. This, coupled with the Light Spirits' superior powers, led to Ghadius growing extremely jealous and bitter. Abandoned and rejected by the people of Phantomile, and left to wallow in self-pity, he developed a hatred for Phantomilians, and those that 'relied on good dreams'.

Eventually, tired of a life in the shadows he was born to dwell within, he led an attack against the Spirit of Light. Surprisingly, he was able to overpower the spirit, and it was only with the combined efforts of all the spirits that Ghadius was finally defeated. The spirits then sealed him away for 3000 years instead of killing him, either because they lacked the power to do so, or were too merciful. Sealed away in the darkness, defeated, dishonored and forgotten, Ghadius grew to despise Phantomile and all of its people, devising a plan that would bring them all into the dark world he was being forced to endure.

How he escaped from the seal is unknown. The seal may have weakened over the years, his own power may have broken him free, or Joka may have released him for whatever reason (most likely adoration or fear, perhaps both).

Soon afterwards, Ghadius, accompanied by Joka, appeared on Bell Hill in Breezegale soon after a strange ship crashed atop of it. With him was the sleeping body of Lephise. It was unknown how she came into his possession, however in the Wii remake, it was shown that Lephise was piloting the ship that crashed into Bell Hill, possibly to escape her pursuers. Whilst Klonoa and Huepow listened in, Ghadius revealed part of his plans. Without Lephise awake to sing the song that will bring light and life back to Phantomile, the world will descend into Darkness and Nightmares, the exact kind of world the Spirits condemned him to. He then detected the presence of Klonoa and Huepow, ordering Joka to take care of the 'mice'. He swept Lephise within his seemingly multidimensional cloak and disappeared.

Sometime after this, he used his powers to brainwash the King of Jugpot, along with his guard and companion, Pamela. He then used his powers to reverse the flow of the Jugpot waterfall, which caused the water to flow up rather than down. This caused the water to no longer reach Forlock, killing off the majority of the forest, presumably along with its wildlife and some of its inhabitants. These issues were later remedied by Klonoa and Huepow, who rescued Seadoph and reverted the waters flow back to normal.

Ghadius then moved on to Coronia, defeating the high priest Moire with little effort and continuing up to the altar, planning to use the crystal at its summit to bring back the Moon Kingdom. Klonoa and Huepow soon arrived on the scene. Ghadius disregarded their presence, stating that their interference didn't matter and referring to them as no more than 'brats', while also berating Joka for failing him. Huepow questioned Ghadius as to what his plans were, to which Ghadius replies "nothing more than simple revenge". He once again demonstrates his hatred of those who rely on good dreams, claiming he will drown them in a world of nightmares. He revealed that by use of Lephise, and the 'egg of destruction' (Nahatomb) that lies within the Moon Kingdom, his plans shall come to fruition once the Moon Kingdom reveals its true form to the world. He then vanished, claiming that "The time has come". A battle then ensued as Joka challenges the protagonists for one last time. Klonoa proved the victor, and Joka regretfully died. His final words were "My/Lord Ghadius", demonstrating his admiration and fondness of Ghadius.

Ghadius was encountered again at the very top of the Moon Kingdom, in an opulent, circular room. The emblem on the floor of the room has an image greatly resembling his mask upon it, hinting to his connection with the Moon Kingdom. Ghadius refered to Klonoa as a 'strange dream', unable to comprehend exactly what he was, yet believing that Nahatomb's re-creation must be perfect by putting the Dream Traveller out of action. He was, however, the only character to acknowledge the fact that there is more to Klonoa than meets the eye (a fact later confirmed by Huepow). Oddly, he refered to both characters as dream travellers, not just Klonoa. He did show some degree of respect for the pair, claiming that he "never would have thought they would make it all the way". After attempting to justify the reasons behind his actions, not caring for the fact that, as Huepow states, he would be destroyed along with everything else should Nahatomb be revived, Ghadius attacked the protagonists, claiming that he will "show them the error of their ways".

After a bizarre battle taking place in a gigantic, rotating wheel, Ghadius was finally defeated. Huepow claimed that the battle was finally over, however, Ghadius' mask spoke out, apparently still alive. Oddly, Ghadius' mouth was no longer visible under the mask, implying that the mask alone was all Ghadius needed to communicate, or perhaps the mask was Ghadius. He stated that more than enough nightmare energy has already been gathered, despite Klonoa's efforts, and the body of Lephise would be taken over and used to bring back Nahatomb, the perfect nightmare. He revealed that all of Phantomile's dreams pass through a prism in the Moon Kingdom's Gallery of Prisms and thus become the building blocks that give form to Phantomile itself, and that "so long as the power of dreaming exists, no one will ever be able to stop Nahatomb."

Huepow though said that they still have the power to stop him, which Ghadius realised to be the "strange dream", but he simply said that "that dream can and will be eliminated by Nahatomb." After that, he declares to the "strange dream" that Phantomile is done for and that the perfect nightmare (Nahatomb) will begin. He then bursts into his trademark laugh, before vanishing for good. It was revealed by Seadoph not long afterwards that Ghadius' tortured nightmares alone were enough to revive Nahatomb ("Ghadius! I never thought he'd go so far as to give it his own nightmares...").

Ghadius makes a cameo in the online comic, as part of a flashback of Klonoa's past adventures. Klonoa recalls his time in Phantomile and facing Ghadius in battle and how he never gave up in their battle.

The battle follows three phases. In the first, Ghadius will rain spherical projectiles down upon Klonoa. These projectiles are slow moving, and move in a vertical line. The location of their appearances is seemingly random, so you'll just have to dodge to the best of your ability once they appear. Hitting the projectiles with your wind bullet will cause them to disappear. Amongst the projectiles there will be a few Death Moos falling. Try to grab as many as possible and fling them at Ghadius. The more damage you can cause during this phase, the easier the rest of this battle becomes.

The second phase is slightly tougher, but easier as you clear away the projectiles. Ghadius will launch three bullet-shaped projectiles around the arena. Following these bullets are Death Moos, two to each bullet. You need to avoid the bullets and the moos, and use your wind bullet to grab a Death Moo, flinging it at Ghadius. This gets slightly easier the less Death Moos there are left, since there are less to dodge. How quickly you can clear this phase depends on your timing, and the angle and trajectory the bullets travel in.

The third and final phase has Ghadius summoning a large triangle surrounded by dark energy. Within the triangle are three Death Moos, seemingly unreachable. At each corner of the triangle is a bullet-shaped projectile. After rotating the triangle, Ghadius will fling this triangle downwards, first right, then left,then centrally. The triangle is huge, and travels incredibly quickly, making it hard to dodge. After memorizing the movement pattern, hit one of the corners with your wind bullet. Doing so will release the Death Moos. Quickly capture them and fling them at Ghadius, and the battle should be won. 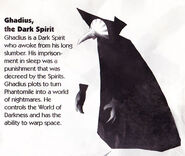 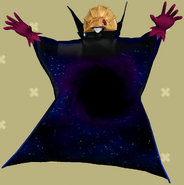 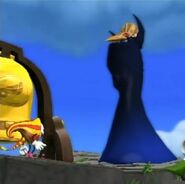 Retrieved from "https://klonoa.fandom.com/wiki/Ghadius?oldid=12620"
Community content is available under CC-BY-SA unless otherwise noted.