Grandpa is the caretaker and "grandfather" of Klonoa. He is the elder of the Wind Village, Breezegale. A natural scholar, he has vast knowledge of Phantomile's history and legend.

Grandpa is the leader of the Wind Village Breezegale, and serves as Klonoa's guardian. When Klonoa returned home from Bell Hill after obtaining the Moon Pendant, the elder took possession of the item for safekeeping and sent Klonoa and Huepow to Forlock to tell Granny the news of the appearance of Ghadius. However later on, Joka learned where the Moon Pendant was and went on to get it, putting Grandpa in danger. When Klonoa managed to reach Breezegale and saw Grandpa safe and sound, Joka and a Pilot Moo appeared in a pair of hovercrafts, with Joka firing a beam down on Klonoa's house with Grandpa inside, taking the Moon Pendant and leaving the elder incredibly injured.

After Klonoa defeated one of Joka's monsters, Baladium, the boy quickly returned to his grandfather only to find him dying slowly in his arms. Before he died, Grandpa told Klonoa that his destiny was to bring the Moon Pendant back. After Nahatomb was defeated and the Songstress Lephise was saved, Klonoa discovered that the Grandpa he knew was just a stranger pretending to be his relative, as Klonoa's life on Phantomile, and all of his memories, were just a lie, fabricated by Huepow as part of a big plot to save Phantomile from the ultimate Nightmare.

In an alternate universe, Grandpa plays a minor role in the game, worrying about Klonoa's wishes to travel and be a hero. 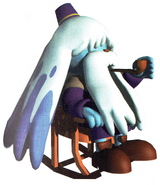