Guntz (ガンツ Gantsu, also known as Gantz) is a wolf in the Klonoa series who made his first appearance in Klonoa 2: Dream Champ Tournament. He is a legendary bounty hunter with a very short temper, and he is somewhat aggressive and arrogant. Guntz is sometimes referred to as The Golden Killer, or the Golden Death. He uses a variety of guns and firearms to attack, and he often travels in a red hover-bike called Red Clan.

Guntz is a teenager, being likely depicted around the ages of 16-18. He has a somewhat feminine appearance and has long black hair tied back into a ponytail, a tradition amongst warriors or royalty of Japan. He wears a grey outfit with a bandolier around his waist, a red jacket, long-fitted gloves, black boots with red straps, and a pair of goggles. He has black fur with yellow markings, sapphire blue eyes, large ears, and a more mature look to his appearance than Klonoa. In the Legend of the Star Medal Official Strategy Guide, he was identified as a wolf.

Due to the nature of Guntz's childhood, he's allowed himself to become more of a loner and looks down those he deems weak. Thus, he doesn't interact with others very well. This was shown in the Dream Tournament where coldly looked down on Klonoa, Lolo, Popka and Chipple, much to their individual irritation. He also shown a duplicitous side as he made a deal with Garlen in kidnapping Lolo to defeat Klonoa in battle. Ironically, he was double-crossed himself and was nearly made a captive by the very man he made a deal with.

When he realized his actions, Guntz showed regret and freed Klonoa and helped him in defeating Garlen though he said he didn't care, most likely out of pride. He made off with the money but left Klonoa with the tournament's trophy possibly as sign of peace. However, in the ending of the same game and in Beach Volleyball, it is implied that Guntz does care about other people.

When getting to know him, he becomes shy and awkward around females, but is rational and cold towards males. However he's shown to be a very loyal friend, even if he prefers to keep others at a distance. He's also been known to have a very short temper. In Namco x Capcom and Klonoa Heroes alike, he is shown to swear and curse a lot, especially at Janga, his arch-enemy.

Guntz's weapon of choice in particular are his twin handguns with trademark stars on the sides. In particular games he may advance to any sort of gun-related weapon (since his name is intended to be a pun on gun use,) and wear a bullet-proof jacket as well.

Guntz jumps in the air and shoots his surroundings, burning everything around him. In, this is his special attack with a twist- he shoots at the volley ball so it will burn the opponents when it lands on their side. Klonoa Beach Volleyball is a sports spin-off from the Klonoa video game series released as a budget title in the last few years of the PlayStation's commercial lifespan. ...

It also appears in Namco X Capcom, when he pulls it off he hops in the air and fires his handguns which now shoot laser spheres at the enemy, after a certain amount of level ups before falling back down to his bike he pulls out his father's rifle and fires it off against them too. This was the attack he used against Janga in Chapter 40 as part of his revenge.

Guntz pulls out his firearms and fires them rapidly whilst rushing an enemy.

Guntz first appeared in as one of the participants in Garlen's tournament, with the intent of becoming the winner and claiming the prize money.

During the tournament, he maintained a rivalry with Klonoa, who he deemed as weak but seemed to respect his determination. He soon defeats Klonoa's friend Chipple in one round and secretly smiles at the latter's sadness. Later in the finals, he shot Popka and defeated Lolo for Garlen to kidnap her, in order to get rid of the "weaklings". This caused him and Klonoa to be the remaining contestants and an angry Klonoa swore to take him down for his actions. After he lost to Klonoa in the final round, he was captured by Garlen who prepared to turn both into gears. Realizing his selfish actions, Guntz helped Klonoa with the intention of saving both from Garlen's tyranny.

Once Garlen was beaten, Guntz followed his way, taking the prize money, much to Popka's protest. As he left, Guntz stopped and gave the winner's trophy to Klonoa, effectively making him the Champion. Guntz then left the area with his reward.

Guntz gets his first playable role in this game as Garlen's partner in the tournament, and he states that his motives are purely related to his work, although he has nothing against the competitors. If Guntz wins the tournament, Guntz will be leaving with the prize money, but Garlen holds him at gunpoint and insists he return it. After asking Garlen about 'the hunter with the poison claw s' (who turns out to be Janga in Klonoa Heroes), Guntz triggers a bomb in Nahatomb's palace, causing it to blow up and gives him a chance to escape. He rides off into the sunset, vowing revenge for his father who was killed by Janga.

In this game, Guntz faces off against Klonoa. After losing, he allowed Klonoa to join him in one of Guntz's attempts to earn money. Later, he meets Janga, the hunter who killed his father, Butz. Janga shot Guntz with his father's old rifle and ran away, leaving the gun behind. Guntz managed to survive the attempt on his life due to the bullet striking his hero medal as opposed to his flesh. After waking up, he recovered his father's weapon and continued in his quest for revenge. In his pursuit for Janga, he literally ran into Klonoa again, who had teamed up with a bomb expert named Pango. Since all of their goals involve catching Janga, Guntz decided to team up with them for his own motives.

Guntz makes a reappearance in an unknown dream world after the dream energy contained by Noctis Sol was unleashed all at once by Tenebrae Hue. The bounty hunter encountered Klonoa, Popka and Huepow in the dream world and has no memory of his friends, threatening them to leave his turf at gunpoint.

It was later revealed that Klonoa and Popka have simply stepped in a vision known as "Guntzland", which was Guntz's dream world. After explaining to Klonoa what he can actually do in Guntzland, the bounty hunter proceeded to get into a fight with Klonoa, which ended after Guntz drove Klonoa out of his dream.

Later he is summoned alongside Chipple and Nightmare Klonoa by Tenebrae Hue to crush Klonoa.

Not much is known about the relationship that Guntz had with his father. It is apparent that Guntz and Butz shared a father/son bond while Butz was still partners with Janga. Butz was a gun user much like Guntz and is implied to be the one who taught Guntz his ways with the weapon.

The two share a friendly rivalry with each other.

In Dream Champ Tournament, Guntz was known to taunt Klonoa while indicating how weak and much of a "impudent brat" he is. In return, Klonoa was angered by Guntz' arrogance and wanted to prove himself to Guntz. Klonoa's dislike grew after Guntz defeated Lolo which put her in danger when Garlen turned out to be using everyone. This led to Klonoa and Guntz being the final two in the dream champ tournament which Guntz loses in the end. As he was being captured, Guntz aids Klonoa who is close to being turned into a gear by shooting the Ngapoko, leaving the rest up to him. Guntz made off with the prize money but not before giving Klonoa the trophy for the tournament which effectively made Klonoa the champion.

Guntz has a rivalry with Klonoa in the beginning of Heroes, but slowly begins to open up to him and eventually ends up having a brotherly relationship with him, even saving Klonoa's life in the Moon. This relationship holds and grows even stronger in Namco x Capcom, first shown when Guntz expresses his concern in taking Klonoa along, telling him that "This time, the enemies are for real, and I'm not sure whether to take you along or not - it'll be dangerous".

At the end of Namco x Capcom, the two seem to share an unbreakable bond.

During Noctis Sol, Klonoa was shocked to see him again but Guntz had no memory of him and threatened him. Klonoa tried to explain that while they were hostile to each other at some point, they were friends though Guntz attacked him. After Klonoa and his friends escaped, Guntz wondered who they were while Klonoa later deduced they were in one of Guntz old dreams and understood his lack of recollection. At the end, Klonoa was shocked to see that Tenebrae Hue summon him, Chipple, and Nightmare Klonoa to destroy him.

In Dream Champ Tournament, Guntz considered her as one of his rivals though she greeted him politely. Due to his taunting and views, he arrogantly looked down on her as Lolo called him a jerk and told him she wouldn't lose in the tournament. This dislike led up to their clash which she lost and she was turned over to Garlen but he paid her situation no mind as he stated she wouldn't of gotten captured if she wasn't weak. It appears after Garlen was defeated that their status turned to a neutral standing between them.

Lolo is also one of the few girls, he doesn't get nervous around maybe because he is used to her.

Guntz has taken a liking towards Pango in Klonoa Heroes, seeing him as a father figure.

In Dream Champ Tournament, he participates in his tournament and makes it to the finals. However, the tournament turned out to be a ruse for Garlen to turn everyone to gears to power his empires. Guntz in particular, was not fazed as long as he was given the prize money and gladly went up against Klonoa who angry that his friend Lolo was used as bait to get him to fight with his best. Before the match, Guntz made it clear that if Garlen tried anything funny then he'd take the prize by force. However, he lost to Klonoa and was captured by Garlen's robots and was angry he'd get turn into a gear. However, Guntz saved Klonoa and watched as Garlen was arrested while making off with the latter's fortune.

Throughout Klonoa Heroes, Guntz went up against Garlen and Klonoa after it is revealed that he had Lolo captured and was working with Janga, attempting to use her power to reawaken Nahatomb which he accomplishes. At the end, Garlen was defeated by Guntz and Klonoa's efforts.

Guntz has a severe hatred for Janga due to the cat assassin killing his father, Butz.

In Klonoa Beach Volleyball, Guntz mentions Janga in his ending, indicating he's looking for a hunter with the poison claws before leaving Garlen.

During Klonoa Heroes when he finds Janga, Guntz acts more vicious and serious as he was willing to kill Janga as revenge for the cat murdering Butz.

As ofNamco x Capcom, Janga and Guntz still have their hatred throughout the story leading to Janga and Joka being defeated by the Heroes.

Guntz's fourth game appearance was in the crossover RPG game: Namco x Capcom as Klonoa's ally who is used in certain assaults such as multi assaults. 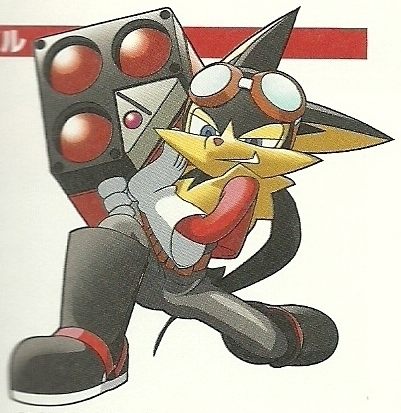 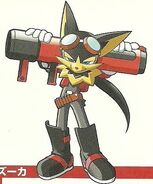 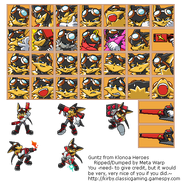 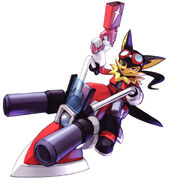 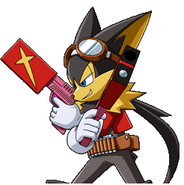 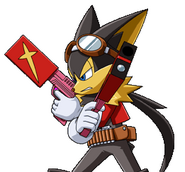 Keroro RPG: Kishi to Musha to Densetsu no Kaizoku 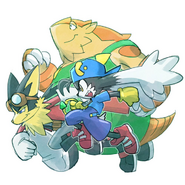 Retrieved from "https://klonoa.fandom.com/wiki/Guntz?oldid=12821"
Community content is available under CC-BY-SA unless otherwise noted.