Huepow (ヒューポー, Hyūpō, also spelled Hewpoe), the Prince of Cress, is a recurring character that first appeared in Klonoa: Door to Phantomile. He also appeared in Klonoa: Moonlight Museum, Klonoa: Empire of Dreams, and Klonoa Beach Volleyball as a referee. His most recent appearance was inKlonoa: Dream Traveller of Noctis Sol.

In the majority of his appearances, he is a companion of Klonoa's that enables him to use the Wind Bullet when inside of his Wind Ring.

Huepow has a strong sense of justice, and won't hesitate to get involved into a dangerous situation. He feels guilty if an innocent person gets hurt in the battle (Klonoa's Grandpa).

Huepow is also very caring, worrying about his mother's safety, and even though he used him, Huepow cares deeply about Klonoa. He extends this caring side to Klonoa's other friends as well, as shown when helped Klonoa save Popka and Lolo.

Huepow, as Klonoa's sidekick, has a few abilities; the majority of them coming from his ability to transform into a ring spirit.

Huepow can freely hover in the air when in his Ring Spirit form, as he is just a floating sphere in this form. In his original form he can fly as long as he has energy. When he is weak, however, he can just float in the air for a few moments, similar to Klonoa's floating ability, as shown in the final battle against Nahatomb in Door to Phantomile.

Huepow has the ability to act as the power source to Klonoa's Wind Ring, powering it up and allowing him to use the Wind Bullet attack, a concentrated orb blast of wind.

Huepow can transform in something known as the Ring Spirit form, a light blue spirit sphere with hands above an halo and with a star above him that he transforms to power up Klonoa's ring. He adopted this form to manipulate Klonoa, as it would be easy to approach him if Huepow looked like he was bonded with the Wind Ring. In this form he can fly to anywhere he wants. He can change back to his original form, a boy dressed in blue. In the Wii remake the Ring Spirit form doesn't have hands.

This form appeared in Klonoa Beach Volleyball. In Super Garlen's ending, Huepow complains that Garlen only won because he called himself "Super". To prove that it was just a mere word, Garlen allowed Klonoa, Joka, Heart Moo and Huepow to be Supers too. However, this change of name and clothes was enough to make Garlen get beaten. in this match Huepow, now calling himself Super Huepow, acted as the referee. Huepow appearance in this form is never seen.

Sensing that the dark spirit Ghadius was released, Huepow called Klonoa, the dream traveler, to Phantomile to save his world. As the prince of the kingdom called Cress, and feeling responsible for the safety of his people he made, Huepow put fake memories in Klonoa's mind. Those included that Huepow was just a spirit that lived inside the Wind Ring found by Klonoa, that they were best friends and Klonoa always lived there.

One day, a dark ship crashed into the mountains of Bell Hill, like Klonoa dreamed sometimes, and the two decided to investigate. They learned that Joka and his master Ghadius are searching for a pendant that holds magical properties. They kidnapped the diva songstress, Lephise, and Klonoa and Huepow decided to chase after them. Along the way, they manage to find the pendant and leave it with Grandpa. However, Joka discovered this and attacked Klonoa's house, stealing the pendant and killing his grandpa. Travelling to Cress, the Moon Kingdom, Klonoa learned that Huepow was actually its Prince, but continued to help anyway. They eventually defeated both Joka and Ghadius, but Ghadius unleashed the beast named Nahatomb. With the help of his friends meet along the adventure, Klonoa managed to defeat Nahatomb and rescue Lephise.

After the battle, Huepow and Klonoa relaxed before he told Klonoa that it was time for him to go back to where he originally came from. Huepow confessed that he was responsible for bringing Klonoa into the world of Phantomile and that the world that he lived in was all a dream and every single moment they shared together was all just a set up so that he could use Klonoa to save Phantomile. Klonoa refused to believe him and wanted more answers, but suddenly he felt himself being dragged into a portal while Lephise began singing the Song of Rebirth, sending Klonoa back to his world. However, Huepow found it too hard to say goodbye to his best friend Klonoa, so he tried to help him stay, but was too late. In the final scene, Huepow was seen crying, showing that he still cared about Klonoa.

Huepow and his friend Klonoa came across a young crying girl who told them that the moon has been divided into fragments named Moon Stones and stolen by a mysterious group of artists that resided in the nearby Moonlight Museum. Determined to help, the duo rushed off to the Museum's entrance, and once they came inside, they were greeted by a painter named Picoo who trapped them inside a piece of artwork. Klonoa and Huepow fought their way out but are continuosly trapped in four different worlds by the other artists. They managed to escape each one of them while collecting the fragments of the moon. After gathering the last one, they find that the Museum itself is a living being and the one behind everything. Klonoa managed to collect the remaining the fragments and restored the moon to the sky, making Museum and its artists see their evil ways and wanting to be better.

Klonoa awoke one morning in the Empire of Dreams with Huepow, and was dragged by the emperor's three royal guards to his throne room. Emperor Jillius himself informed Klonoa that he broke the sacred law of his kingdom by dreaming, which he viewed as a worthless endeavor and a total waste of time. The Emperor himself suffered from insomnia, and decreed that if he cannot be allowed to dream, then no one can. Rather than punish Klonoa outright, he instead offered him a challenge: If Klonoa can defeat the four monsters that are ravaging the Empire, then his execution will be canceled and he will be set free. Joined by his friend Huepow, Klonoa had no choice but to travel to the surrounding lands and battle with the four monsters living there: Chipple, Muzika, Chirin and Medim.

After the last one was defeated, it was discovered that the people who dreamed were turned into monsters by someone from the empire itself. With the help of the three guards from before, Klonoa and Huepow managed to reach Jillius's throne room and defeat him, only to discover that his minister, Bagoo, was manipulating him and the one responsible, while Jillius just left clues in the monsters' dreams. With Bagoo defeated, Jillius decided to allow the citizens to dream, while Klonoa and Huepow disappeared.

Huepow appeared in the Dream Art of the Vision Ex. It showed that Klonoa and Huepow maintain communication even in different worlds, with the image showing Klonoa, with Lolo and Popka, receiving a letter and gifts (apples) from Huepow.

Huepow acted as the referee in the Beach Volleyball tournament, sponsored by Garlen and Nahatomb. In both versions of Garlen's ending he won the tournament, but Huepow though it was unfair because of the advantage his machine gave him. Garlen decided to prove Huepow wrong by giving the same machine to so they can play on equal terms, which backfired and ended with Garlen getting defeated.

Huepow senses Klonoa dreaming of his past and pulls him to the dream stream and reunites with him, being surprised his attempt actually worked. He asked Klonoa to help save Phantomile from the invasion of Nighty-Knights. Together, they evaded their enemies and after getting a safe distance, Huepow informs him of why he summoned him and how the villains came through portals. Hearing this, Klonoa then worried for his friends of the other worlds.

When Tenebrae Hue begins summoning creatures from different universes out into Phantomile, and one of these creatures is Popka, Klonoa's friend who Huepow asks if he knows when he jumps down to save him. The two rescue Popka from the threat and run off after Klonoa inflates them. When Hue decides to launch the Nightmare Missile, Klonoa wanted to leave his ring behind for Popka and Huepow's safety, but his two companions insist on staying with Klonoa until the very end. Touched by their loyalty, he tells them to follow him as they go after the villains. Klonoa and Popka clung to the Nightmare Missile while Huepow was safe in Klonoa's ring.

The three traveled through the dream void where they appeared in a different world. As Klonoa and company try to think about where they are, a mysterious figure scorns and demands to know who they are. The Figure is revealed to be Guntz who puts Klonoa at gunpoint having lost all of his memory of Klonoa. As Klonoa tried to help Guntz remember him, Huepow notes to Klonoa that Guntz doesn't recall him and Guntz informed them that they are in "Guntzland" and Klonoa cannot tell him what to do. The bounty hunter attacks Klonoa, Popka and Huepow, driving them out of his dream world. Both Huepow and Klonoa deduced that because it was one of Guntz' old dreams, it explained why he didn't recognize Klonoa.

They soon stumbled upon Chipple's dream where the kangaroo is a confident fighter apart from his nice and nervous self. Chipple has no memory of Klonoa and mistakes him as his next challenger in his boxing match. When the group attempts to escape Chipple, he transforms into his monster form and attacks.

Klonoa, Huepow and Popka were able to escape back into the dream void, and were transported to a black and white world. They hear a crying voice and follow it to a stronghold protected by Moos. After defeating the enemies, the trio enter the stronghold and find the source of the cry. It is Lolo who was trapped in a bubble being tormented by a dark lookalike of Klonoa called Nightmare Klonoa. The lookalike mocks her situation as he pretends to be the real Klonoa and cruelly tells her that nobody cares about her.

Klonoa then confronted his doppelgänger, with Huepow encouraging him to take down the latter. After Klonoa managed to inflate and temporarily suspend his dark doppelgänger. He liberates a happy Lolo and three tend to her, with Huepow offering to get water for her but she kindly turned his offer down as she was alright.

Once Klonoa told Lolo she was having a nightmare and they'd return with her; Klonoa, Popka and Huepow clung to her as she woke up and returned to Lunatea. Huepow was impressed as he pointed out that Lolo's connection to Klonoa was what made it possible.

Huepow participated in defending the bell tower, when Lolo pointed out the attacking Nighty Knights. He couldn't do much, since he was drained but Lolo aided him by entering the wind ring and giving them enough power to blast the enemy away. After Tenebrae Hue appeared, Huepow tried to help Lolo and Klonoa when Hue announced his plans to invade their world but Popka held Huepow back.

Klonoa: Door to Phantomile concept art of a scrapped boss fight against Huepow 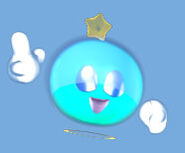 Klonoa: Dream Traveller of Noctis Sol
Add a photo to this gallery

Retrieved from "https://klonoa.fandom.com/wiki/Huepow?oldid=11826"
Community content is available under CC-BY-SA unless otherwise noted.