Poison claws
Create copies of himself

Janga (ジャンガ), also known as Poison Claws Janga, is a foul-mouthed, maniacal being dressed in purple who seeks to harvest nightmares and use them for his own sinister purpose. He is a villain mentioned during Guntz's ending in Klonoa Beach Volleyball, makes his first official appearance in Klonoa Heroes and reprises his role as a major villain in Namco x Capcom.

He employed Joka to do his dirty work, and works with Garlen to see that his plans come to fruition. Guntz has taken it upon himself to get revenge on Janga for what he did to his father many years ago.

Janga is a foul-mouthed, aggressive alcoholic who is mentally deranged. He does show some intelligence as he kidnaps Lolo so Klonoa's ring can't function. He also knows when to pick a fight and flees when he sees he's met his match. Janga is disloyal and untrustworthy as he betrays Guntz's father in Klonoa Heroes and his own team in Namco x Capcom.

In Namco x Capcom, he shows an interest in the character Felicia from Darkstalkers, who finds him repulsive.

So far Janga's only weapon appears to be his claws hence the nickname "Janga of Poison Claws." His claws can inject a deadly poison to whoever he slashes or pierces his claws with. He is also extremely agile, easily dodging gunfire.

As shown in his boss fight, he also has the ability to create copies of himself. When he does this, he does one of two attacks; he can do a scissor attack that has two chances of hitting, and the other is when he splits into four and releases a boomerang-like attack. When he does the second kind of splitting attack, there is a long pause so you can attack Janga.

Janga was originally a hunter who worked alongside Butz, Guntz's father, to search for the Darkness of Nahatomb. When Butz refused to revive Nahatomb, Garlen ordered Janga to kill him, and so he did, taking Butz's weapon with him. With Garlen and Joka as his new partners, he wanted to harvest nightmares and use them for his own sinister purpose.

Janga was first seen in the Ruins of the Moon, sending nightmares from the captive people within the ruins to the Lunar Base. Guntz soon recognized Janga as the one who killed his father, Butz, and had vowed to avenge his father by killing Janga. Realizing that Guntz is Butz's son, Janga laughed and fled into the depths of the ruins. Janga was soon found again by Guntz, but this time Klonoa was with him. When Guntz tried to fire shots at Janga, the maniacal purple cat dodged the bullet, used Klonoa as a shield, and escaped, with Guntz angrily following suit.

Guntz then chased Janga all the way to the Ruins of the Moon in order to exact revenge against him for killing his father. Janga is just too quick for Guntz to catch him, and he jested at Guntz's petty revenge. He couldn't help but laugh at the fact that Guntz only has a Bronze Hero Medal, making him third-rate. He then goes on to say that Butz's Hero Medal was gold, and showed off a little keepsake of his own from Guntz's father, right before taking a cheap shot at Guntz and escaping deep into Volk City.

Janga was pursued by Guntz until he was cornered in one of the deepest corners of the Underground Factory. But even then, Guntz couldn't manage to catch Janga, leaving an opening for Janga to attack. He rant into Guntz, knocking him down, and then told him that he wouldn't be using his poison claws to kill Guntz... but the gun of his own father! A shot was fired, and Janga escaped, unaware that Guntz survived the gunfire. On the Moon World, Janga was once again confronted by Guntz, along with Klonoa and Pango. Janga revealed to Guntz that it was Butz who had found the method of the Darkness of Nahatomb, but he didn't want to use it, to which Janga resorted to killing him. Guntz then engaged Janga in battle.

After being defeated by the heroes, Janga can hardly believe that he lost. But just as Guntz tells him it is the end, Janga apologizes and begs to Guntz for forgiveness. He tells them that he was only following Garlen's orders and that he should be forgiven, as Butz would not be happy if Guntz decided to kill him right then. Irritated, Guntz is having a difficult time hearing Janga out, as Janga continues to explain that he was going to betray Garlen right from the start and that his crimes should be overlooked. Guntz considers this, and finally says, "...Shameful. It is shameful that I had run after such a darned fellow, and tears fall." Janga is speechless.

Shooting Janga's hat off as a warning, Guntz tells Janga to leave and never appear before him again, and the purple cat flees. However, Janga lunged for Guntz out of nowhere to strike him with his poison claws in a sneak attack, but Klonoa intervened, taking the strike instead and being poisoned. Enraged, Guntz fired a few shots at Janga, injuring him. Despite being injured, Janga laughed and told him that Klonoa was going to the other world by his poison. As he was stepping away, Janga accidentally stumbled back into a pit and plummeted into the darkness to his death.

Janga was first seen in Chapter 3 (although as a silhouette) talking to Joka on the 59th floor of the Tower of Druaga. He came looking for work and was surprised Joka was there. Joka told him there was a place he needed to go, being the material world, claiming Felicia as a "very adorable catgirl", he complied as Joka headed to "The Divine World". Janga wondered what he were to do there, mainly thinking of The Goddess Ishtar as his objective. Joka said it was not, claiming all of his power within him could not stop her, he said he was to be a spy. He also said some of Janga's mission was to be a spy of sorts, and Janga replied in disgust that he hated that type of work. Joka said that she must not be harmed, but the other females are to be done as he thinks. Janga tries to tell him he was joking on attacking Ishtar and heads off on his mission.

Janga appears later when Sakura and Karin are at the gates of Justice High School. They were suddenly attacked by 2 Moos and a Giant Moo and took them out at the expense of Janga getting more angrier when he comes to fight. Janga calls one of them a "sacrifice" knowing about that certain fact of girls being "sacrifices" for Druaga. Sakura asked if he was friends with Joka, which Janga replied with a "yes", and he introduces himself. Hoping Sakura would comply, Janga told her to come with him, to which she denied it since people told her not to go with strangers. He tries to tell her it's okay to bend the rules sometimes, but was then stopped by Hideo and Kyouko, who criticized his ways of "wooing women". After a few minutes of battle Janga attempts to use more smooth talk, but the Justice High School teachers brush him off. Joka's hired help of Druaga minions (Consisting of a Mage, a Red Slime, and a Ghost Mage) suddenly show up, and Janga decides to put 'em to use. He threatens Hideo that the Mages were good at curses and bet it'd be funny if they got through the gates, but Hideo says there are about 448 students prepared to attack them. Janga gets very mad and tries to get Hideo mad. Later a pair of ninjas attempt to save them, Karin recognizes one as Guy, the other one introduces himself as Ginzu, who adheres to the same fighting style as Guy. Later, Janga attempts to attack Sakura again by raping her, hoping to finally get her for Druaga, but is attacked by Akuma. Badly hurt, and left with little energy, he wonders why the Raging Demon attacked. Akuma said he was displeased with his actions, with Janga running off along with any other enemies that were not killed.

Later in Chapter 6, Janga came to the Temple of Tranquility with an army of Moos and Glibzs, Guntz and Klonoa were the ones taking out the first wave (Which also had Shield Moos among them) by themselves. He becomes furious seeing that "a couple of kids with toys" are beating up his army, especially since he was running late. When Guntz found Janga out, he became enraged, and Klonoa tried to ask how he knew Janga, but Guntz ignored him. Janga told him it was "MISTER Janga of Poison Claws" to him, seeing he was acting childish despite the fact he wants him dead. Janga does not know who Guntz was during this point, but won't care if he gets to kill him. Later Janga asks Guntz who he is, Guntz says to "CHECK YOUR OWN HEART!", Klonoa tries to calm him down again, but doesn't comply, with Janga still wondering where he seen that face before.

Later a group of people sent by the Goddess Ishtar came to look for the High Priestess, coming from "The Material World" in their case. Sakura and Karin were also in the group, and Janga was surprised that a "Sacrifice" was in the group. Sakura wanted to beat up Janga after what happened three chapters ago, Hideo and Kyouko were also in the group, hoping to gain more answers from Janga about the sleeping sickness. Janga got more surprised seeing them too. Guntz retorted saying "looks like everyone hates you.", Janga tries to tell him to knock it off, but Guntz tells him to shut up and die like the traitor he was. Janga saw the cross mark on one of his handguns, and it finally hit him. He remembered that Guntz was Butz's son, and he tells him to get where he is and "personally" send him where he was. Guntz tells him he was dead meat, and Klonoa tries introducing him and Guntz to the heroes on the other side of the place, in which Reiji, the leader said his intro, but said the others will have to wait due to Janga's attack. Later Janga attempts to escape into the temple, which Guntz and Klonoa go after him due to Guntz wanting revenge, leaving the others outside. They hurried after they kill the other phantom beasts to help them.

In chapter 7 Janga was able to get in the main room of the temple, where Joka was having a standoff with Kurino and Sabine. Joka asked about his mission, with a reply from him sayig it was terrible, and have 2 of the "sacrifices" there too, in which Joka thinks his appearance in person was worth it. Unfortunately Klonoa and Guntz were in hot pursuit, which had Janga mad. Klonoa was also surprised Kurino was there, since they had met near the Tower of Druaga waiting for Gilgamesh. Kurino wondered if there was any others, but Klonoa said Guntz HAD to get revenge so he followed Janga. Janga was mad that he decided to team up with Joka to take care of them along with Kurino and Sabine. Later on the others of the hero group came to assist, which Janga got even more angry. Kurino wondered if they ere on their side, in which was true, so all their enemies were the same. After they took out the enemies, Janga ran away. Guntz wanted to follow but Klonoa stopped him, which made him a bit disgruntled, since he wanted revenge. 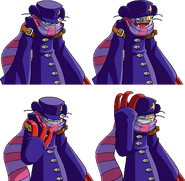