Kaze no Klonoa: Moonlight Museum, or Klonoa: Moonlight Museum is a video game developed and published by Namco and released exclusively in Japan for the Bandai Wonderswan in 1999. As Klonoa's first handheld adventure, it is the first game in the series to place him in a fully two-dimensional world, and establishes the system that his Game Boy Advance titles will use.

Taking place sometime before Klonoa: Door to Phantomile, Klonoa's first game, Kaze no Klonoa: Moonlight Museum stars Klonoa and his friend Huepow as they come across a young crying girl who tells them that the Moon has been divided into fragments and stolen by a mysterious group of artists that reside in the nearby Moonlight Museum. Determined to help, the duo rush off to the Museum's entrance, and once they come inside, they are greeted by a painter named Picoo who traps them inside a piece of artwork. Klonoa and Huepow must fight their way through five worlds within the museum itself before finding the source of all their troubles and restoring the moon to the sky.

Setting the standard for all the future Klonoa handheld titles, Moonlight Museum displays several standard features for an action sidescroller. The player controls Klonoa as he runs, jumps, and fights his way across several worlds, solving small puzzles in the process. Klonoa defeats enemies by picking them up using a special weapon called the "wind bullet", a ring-shaped object inlaid with a small blue jewel that can fire a small burst of wind straight forward and draw in an enemy, allowing for Klonoa to pick them up over his head. Once he has them, Klonoa can either throw them straight forward, taking out any enemies they happen to hit, or use them to perform a double jump, giving him access to places he otherwise couldn't reach. Also, by holding the jump button, Klonoa can hover in midair for a short duration by flapping his large ears, which also slightly increases his jump distance.

By completing all five worlds and beating the game, Klonoa can access special bonus stages called "EX Stages". These visions are included just for fun, and beating them has no effect on the actual story.

The game itself is divided into five worlds, each of which is split into six stages called "visions". At the end of each stage, Klonoa must find a door which is unlocked by finding all 3 stars within the vision itself. There are also 30 crystals (or "dream stones") in each vision, collect all these to finish part of the picture shown at the end of the vision (one picture per world). In addition, Klonoa can also find hearts that can replenish his health, as well as 1-up items that look like Klonoa's hat. There are no boss battles in this game.

Kaze no Klonoa: Moonlight Museum was the 10th best-selling game during its week of release.

Since the game's availability is limited only to Japan, English reviews are somewhat difficult to come by. In 2000, IGN gave an evaluation of an imported copy of the game, and referred to it as a "...WonderSwan platformer that's cute, cuddly... and painfully average" in awarding it a score of 6.0 out of a possible 10. While consumer reviews remain somewhat better, the game itself is regarded as a simplistic representation of the Klonoa series as a whole and thus usually more revered as a collector's item. 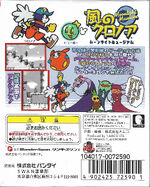 Back of box (Credit to Klonoa @ Blog)

World EX gallery
Add a photo to this gallery

Retrieved from "https://klonoa.fandom.com/wiki/Kaze_no_Klonoa:_Moonlight_Museum?oldid=12823"
Community content is available under CC-BY-SA unless otherwise noted.