King Seadoph is the king of Jugpot, the Water Kingdom, who appeared in Klonoa: Door to Phantomile and its Wii remake.

As King of Jugpot, King Seadoph has the ability to reverse and forward the flow of water that is needed to flourish the trees in Forlock. He is also Pamela and Karal's leader.

Seadoph is the king of the Water Kingdom of Jugpot, Phantomile's only remaining kingdom. He is the guardian of the Eternal Spring and a keeper of some of Phantomile's secrets. He, along with Pamela, were corrupted by Ghadius to prevent the water from flowing to Forlock, making the water flow backwards (meaning the water flows up rather than down and that the water no longer reaches Forlock, killing off the majority of the forest, presumably along with its wildlife and some of its inhabitants). Ghadius had then informed King Seadoph of two 'brats', Klonoa and Huepow, and that they were on their way to Jugpot to restore the water flow.

After Klonoa and Huepow entered Shell Castle with the help of Karal, the corrupted King Seadoph confronted Klonoa and summoned Pamela to assist him in his attempt to destroy Klonoa. During the battle,  Seadoph was used as ammunition to strike Pamela, an attack method that also helped knock some sense into the corrupted king. Both King Seadoph and Pamela were eventually defeated and returned to normal.  Klonoa then explained to Seadoph what happened, and the King soon restored the water flow to Forlock Forest and summoned Karal to take Klonoa back to Forlock.

King Seadoph later joined Klonoa after he defeated Ghadius, and celebrated his victory, along with Moire, Granny, Balue, Karal, Pamela, and The Queen of Cress. He participated in the final battle against Nahatomb, and after its destruction, he presumably returned to Jugpot. 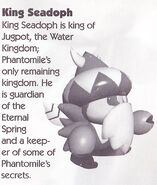 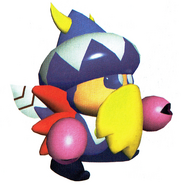 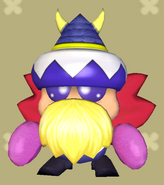 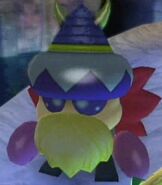 Retrieved from "https://klonoa.fandom.com/wiki/King_Seadoph?oldid=12698"
Community content is available under CC-BY-SA unless otherwise noted.