The King of Sorrow is the hidden true main antagonist of Klonoa 2: Lunatea's Veil. As his name suggests, he is the ruler of the Kingdom of Sorrow, the fifth kingdom of Lunatea that was hidden away from the world when it refused to accept sorrow.

The King of Sorrow's physical appearance is reminiscent of Klonoa's original design. He is mostly unclothed and wears a collar with two scarf-like threads coming down past his feet. His eyes are tinted red, possibly from weeping. His fur is green and white on the inside of his ears and center of his chest.

As expected from his name and title, he is always sad and grim with the only exception being the moments when he is enraged. He is generally respectful and very softly spoken, if a bit bitter, to those around him. He seems to be desperate for people to accept sorrow, willing to use violence against Klonoa as a resort.

With the power of sorrow, the King of Sorrow can create a forcefield around him, and lift white, spiked objects in the area. When levitating, he can throw bombs on the ground that will explode when touched. He is also able to create an alternate dimension, as seen in the first part of the fight. The tunnel-like interior of this dimension has parts of it riddled with clear, spiky balls.

He also had the ability to create a fake guru-like figure named Baguji to guide and aid Klonoa during his quest. When engaging Klonoa in his personal dimension, the King took on the form of a monstrous version of Baguji with a single red eye and a large mechanical claw to face him. This apparition gradually fell apart as Klonoa threw his own bombs back at him.

A mysterious voice called out to Klonoa for help when he was drifting through a dark void before he entered the world of Lunatea. It was heard again when Klonoa claimed the Element of Tranquility, made his way through the Empty Sea of Tears to the Ishras Ark, and through the Forgotten Path in the Kingdom of Sorrow. After the events of Leorina trying to use the ring to gain the power of the gods and stopping the Ishras Ark, Klonoa navigated through the Kingdom of Sorrow to defeat its King, who was using the Ark to connect to Lunatea, consuming the world in sorrow.

Klonoa, Lolo, and Popka soon confronted the King of Sorrow in his lair of the Terminus of Tears. It was revealed that the King of Sorrow led the Dream Traveler by false prophecies and saviors, using the seer Baguji as an illusion, before finally revealing that he was the one who summoned Klonoa to Lunatea. In the end, however, the King decided to use Klonoa as a vessel for the pain he suffered in isolation and fought him. During the battle, the still-injured Leorina lent the power of Tranquility, Joy, Discord, and Indecision to Klonoa from her fake ring to his Wind Ring, to help make the King understand what the world of Lunatea was all about. The battle ensued when the King retaliated by summoning a forcefield around him with an ear-piercing scream.

When Klonoa mortally wounded the King of Sorrow, the King softly pleaded to Klonoa to help him, revealing that he was the one who was calling to Klonoa for help this whole time. The Dream Traveler responded that he will help the King and shot a Wind Bullet up at the Bell of Sorrow, ringing it and allowing the Kingdom to be part of the other kingdoms of Lunatea once again. Klonoa held the dying King of Sorrow in his arms, reassuring him that the world of Lunatea would no longer forget sorrow. The King smiled to Klonoa, before fading away into particles of light, which drifted into the air, and the Bell granted Klonoa the fifth Element of Sorrow.

In the credits, a baby resembling the King of Sorrow was seen in the arms of the High Priestess. It is implied that the King was reincarnated, smiling and laughing, giving the image that he can finally be happy.

The King of Sorrow makes a brief cameo in the strip entitled "Adventures Yet to come". While reminiscing on his past adventures, Klonoa has a flashback of how he faced the King of Sorrow and how he defeated the latter by never giving up in their fight. 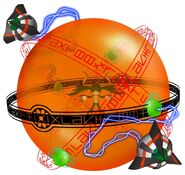 The King of Sorrow in attack mode

The King of Sorrow in Klonoa 2 Luntea's Veil 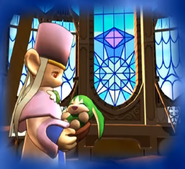 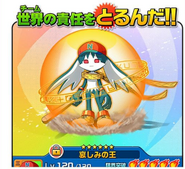 The King of Sorrow in Famista Dream Match

Add a photo to this gallery
Retrieved from "https://klonoa.fandom.com/wiki/King_of_Sorrow?oldid=11862"
Community content is available under CC-BY-SA unless otherwise noted.