Klonoa: Door to Phantomile is a video game developed and published in 1997 by Namco for the Sony PlayStation video game console. The game's story focuses on Klonoa, an anthropomorphic creature and his sidekick Huepow, a "spirit" encapsulated in a ring.

The game was critically praised, and sales in Japan reached fourth in the weekly charts. Sales in the United States, Canada and the PAL region were low. An original game, Door to Phantomile was followed by Klonoa 2: Lunatea's Veil and five related games. A remake of the game was released for the Wii in 2008 in Japan and in 2009 in North America and Europe.

is a side-scrolling Platform game viewed from a 2.5D perspective. The player moves the protagonist, Klonoa, along a path in a two-dimensional fashion, but the game's surroundings are rendered in three dimensions. This allows the path followed to curve and for the player to interact with objects outside of the path. The game is divided by levels called "Visions", where the player progresses by following a path with defeatable computer-controlled enemies and puzzles that must be solved. At the end of some levels, the player must defeat a boss. The player defeats enemies by utilizing Klonoa's weapon, the "Wind Ring", a ring that fires a burst of wind called the " Wind Bullet ". If the Wind Bullet hits an enemy, Klonoa lifts the enemy above his head. From this position, he can throw the enemy into another enemy to defeat them, or use the enemy to perform a double-jump allowing for new locations to be reached. If the player holds the jump button Klonoa floats in mid-air for a short duration by flapping his ears, which increases the jump length. Environmental factors such as small, localized tornadoes and springboards launch Klonoa up or forward, allowing the player to overcome obstacles.

Klonoa: Door to Phantomile is set in the fictional world of " Phantomile ". The world is composed of five main locations: Breezegale, the "Wind Village" ; Jugpot, the "Kingdom of Water "; Forlock, the "Tree Village ", Coronia, "Temple of the Sun " and Cress, the "Moon Kingdom ".

Breezegale has a large windmill located at the center. The villagers can harness the power of the wind and shape and process stone using concentrated air. Behind the windmill is an abandoned mine named "Gunston Mine". At the top of the mine is " Bell's Hill " (also known as " The Hill of the Bell ") which features a ringing bell to announce the time.

The kingdom of Jugpot provides the world with a boundless water supply. The kingdom's castle, "Shell Castle", has a water wheel attached to it.

Forlock is built around a large tree. The inhabitants are known for their woodworking skills and use things such as wood, nuts, and vines as means to travel between trees.

Coronia is an unpopulated shrine that floats in the sky. A creature raised by the priests, "Nagapoko", resides in Coronia.

Cress is a mythical kingdom. A legend in Phantomile states that "dream energy ", a substance made up of forgotten dreams, is gathered there. This substance is said to be what gives Phantomile its shape and form.

The characters of Door to Phantomile are fantasy-like and speak in a structured fictional language. The player controls Klonoa, an inhabitant of Phantomile who carries a ring-bound spirit named Huepow. Klonoa lives in Breezegale and was raised by Grandpa, the current village elder. Breezegale's Gunston Mine was led by Balue, a large man with a love interest for the mythical "singing diva " Lephise. Characters outside of Breezegale are Granny, the elder of the Forlock tree village, and King Seadoph, the king of Jugpot who protects the everlasting water supply to Phantomile. The primary antagonist is Ghadius, a dark spirit who aims to turn Phantomile into a world of nightmares. Ghadius is served by the rude and loud-mouthed Joka, a creature resembling a Jester.

The story begins with the legend of the land of Phantomile, a mysterious place that is fueled by the very dreams people have at night. As a result, no one can clearly remember the dreams they have had, even if they occurred recently. However, a young boy named Klonoa who lives in the town of Breezegale with his grandfather has been having dreams about a mysterious dark airship crashing into a nearby mountain, and can recall every detail of it.

One day, a mysterious ship does indeed crash into the mountain, and Klonoa and his friend, a "ring spirit" named Huepow, decide to investigate. After fighting several small, round creatures called Moos, they reach the top of the mountain, only to find two mysterious creatures. They learn that the leader's name is Ghadius, and his accomplice is a short sinister-looking clown called Joka, and together they are searching for a pendant that holds certain magical properties. They kidnap a woman named Lephise, and after returning to their village, Klonoa and Huepow decide to chase after them. The pair, upon entering Forlock Village, discover that their path is blocked due to a lack of water. Thanks to a Jugpot guard, Klonoa and Huepow discover that a problem exists within the kingdom.

Klonoa: Door to Phantomile was directed by Hideo Yoshizawa as his tenth project. The game originates to a project proposed by Yoshizawa. The concept had a serious story focused on robots with a motif of "ancient ruins". The idea was eventually dropped, and a more comical story was adopted. Yoshizawa was dissatisfied that many developers did not prioritize story, and wanted to create a more cinematic game.Tsuyoshi Kobayashi, main planner, conceptualized the gameplay of Door to Phantomile. He developed the idea of a fast-paced action game where the character could move and be attacked while making use of an enemy.

Klonoa and other characters were designed by Yoshihiko Arai. Arai's first design, "Shady", had a shadow-like appearance. However, he felt that the lack of color did not seem tasteful, and dropped the design. His next design was created with cat eyes and long ears, as Arai felt that a person's eyes and silhouette are the features noticed when they are first met. He added a large hat and necklace to give the character a childlike and energetic quality. The design was kept and used for Klonoa. A running aspect of his designs is the Pacman design on his cap.

Namco felt that the game would be appealing to a wide audience, thinking that the adventure-like aspects would be enjoyable for children and the emotional plot twists would be appreciated by adults. Yoshizawa designed the story using dreams as an important concept - "I was struck by the idea that when you wake up sometimes in the morning and you know you had a dream but you can't remember what it was, obviously the dream went somewhere, at least in my way of thinking. I thought, 'I wonder where these dreams go. What if all these dreams that are lost when people wake up but they can't remember are carried away and collected somewhere like some sort of energy?'" The characters and setting were implemented with things that Yoshizawa felt could appear in anyone's dreams, with stages appearing like pleasant dreams and others like nightmares. "We tried to imagine a dream world people could relate to from their own dreams and experiences."

Klonoa: Door to Phantomile was publicly revealed at E3 1997 with a trailer video. Namco stated their target demographic as a younger audience, hoping the cartoon-like antics of Klonoa would appeal to children. The game was later presented at the 1997 Tokyo Game Show with game demos and an actor in a Klonoa costume. Klonoa: Door to Phantomile was published by Namco in Japan on December 11, 1997. Namco-subsidiary Namco Hometek published Door to Phantomile in North America circa March 1998. The game was lastly published by Sony Computer Entertainment Europe in areas of the PAL region on June 5, 1998. These releases were separated by the languages of English, German, French, Italian and Spanish.

Two official guidebooks were released in February 1998. The first guidebook, produced by ASCII and published by Aspect Co., Ltd., includes an additional 18 pages of development information. The second guidebook was published by Shogakukan and includes staff interviews, artwork and a T-shirt. A manga was published by Enix on March 27, 1998. It was released as a part of 4koma Manga Theater, a Yonkoma series currently published by Square Enix. Illustrated by eight artists, the manga depicts Klonoa, Huepow, Balue and Lephise encountering creatures and antagonists such as Joka and Ghadius.

Door to Phantomile sold 51,441 copies when the weekly Japanese charts were released on December 14th. This placed the game fourth for the week; one position lower than Shining Force III: Scenario 1 and one position higher than J-League Winning Eleven 3. The sales also made Door to Phantomile the week's second best-selling PlayStation video game and best-selling Namco video game. The game remained in the top 50 for 10 more weeks, when sales had reached a total of 159,284.

Ron Dulin of GameSpot rated Door to Phantomile 9.2/10 and gave it an "Editor's Choice" award. Dulin found the gameplay to lack repetition, and praised the game's pseudo-3D approach. He criticized occasional perspective problems, where he had difficulty judging the distance of moving platforms. Dulin praised the game's enemy and level design, and stated that the music is fitting but "occasionally annoying". His "only foreseeable problem" is the surreality and cuteness of the game's artistic design. Dulin stated that there are "only two real problems" - the game is "a bit too cute for its own good" and "a little short" - and concluded by calling it "one of the best side-scrollers in years". A reviewer from IGN rated Door to Phantomile 8.0/10 and gave it an "Editor's Choice" award. The reviewer criticized the game for being too cute and not having enough levels, but also criticized the bosses for being too difficult. IGN concluded by calling it "arguably the best (platformer) on the market".

Four reviewers of Electronic Gaming Monthly each gave Door to Phantomile a rating of 9/10, and the game received an "EGM Gold" award. The game's visuals and sound were separately rated 9/10, and its ingenuity and replay were separately rated 8/10. The four praised Door to Phantomile, calling it a "fantastic game" and a "platform masterpiece". One reviewer criticized the camera perspective, stating that it occasionally blocks out areas needed to be seen, and another criticized a lack of difficulty. They concluded that the game's best feature is its "old-school style play", and its worst is that the "childish feel may turn off some".

Klonoa was awarded "Best Character" at the Tokyo Game Show by the Consumer Electronic Software Association. Editors of PSM, an independent PlayStation magazine, ranked Door to Phantomile the 19th best PlayStation game in 1998. 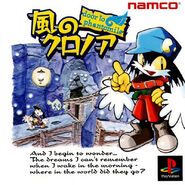 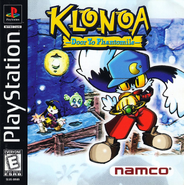 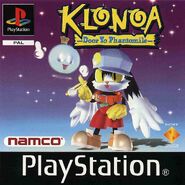 European Cover
Add a photo to this gallery

Retrieved from "https://klonoa.fandom.com/wiki/Klonoa:_Door_to_Phantomile?oldid=12116"
Community content is available under CC-BY-SA unless otherwise noted.