Klonoa: Dream Traveler of Noctis Sol was an official webcomic series published by ShiftyLook and drawn by Hitoshi Ariga.[1]

The online comic is updated on Wednesdays on Shiftlook.com starting September 26, 2012, and later updated on both Wednesdays and Fridays. With the site preparing to close however, the comic ended on March 14, 2014, leaving the story unresolved for the unforeseeable future.[2]

With the closing of Shiftlook, the comic been archived on http://klonoa.the-comic.org/ .

Season one begins with Klonoa telling the reader about his past adventures, making reference to the Klonoa games, Klonoa Beach Volleyball, Klonoa: Door to Phantomile and Klonoa 2: Lunatea's Veil. As Klonoa is sleeping, he reflects on how he had several adventures and made good friends along the way. He is later woken up by loud noises outside. There he meets Huepow who informs him that he brought him there and tells him about the new enemies attacking Phantomile known as Nighty-Knights. Klonoa and Huepow once again join forces to escape from their pursuers, and once out of harm's way, Klonoa learns about the threat. He wonders if his friends in Lunatea are alright from possible attacks by the Nighty knights, since the villains could be anywhere.

In Lunatea, a massive swarm of Nighty-Knights rain down from the skies in preparation for conquest. Popka and Lolo are shocked to see the looming threat and The High Priestess shows doubt as she believes that they cannot defeat the Nighty Knights. Prior to this, Lolo informs The High priestess that they shouldn't give up but the latter states they need help and sends them off but Lolo refuses to leave her side and she sends Popka through a portal to get help.

Back at Klonoa's location, he overhears the night knights mention Tenebrae Hue who begins to operate a machine to do an unknown purpose. Outside, Klonoa notices portals forming in the sky summoning various creatures from different universes out into Phantomile. One of these creatures is screaming Popka, something that shocks Klonoa. Popka falls on the ground, where he is surrounded and about to be rounded up by the Nighty Knights like everyone else. Popka then runs off from the knights, while Klonoa notices his old friend's plight. Klonoa immediately jumps down to rescue Popka. One of the knights reports to his master, as Tenebrae Hue ask if they had captured Klonoa but as the latter is about to meekly reveal the truth, another minion appears to report Klonoa is causing havoc in the area. Hue is surprised that Klonoa was able to come to him and orders his forces to capture him, to no avail. Hue is amused to see that Klonoa live that long with his skills and decides to launch the Nightmare Missile.

Klonoa wants to leave his ring behind for Popka and Huepow's safety, but his two companions insist on staying with Klonoa until the very end. Touched by their loyalty, he tells them to follow him as they go after the villains. The season ends with Klonoa and Popka hanging on to the Nightmare Missile while Huepow is safe in Klonoa's ring.

The Season begins with Klonoa, Popka, and Huepow still traveling through the dream void to where they appear in a different world. As Klonoa and company try to think about where they are, a mysterious figure scorns and demands to know who they are. The Figure is revealed to be Guntz who puts Klonoa at gunpoint having lost all of his memory of Klonoa. As Klonoa tried to help Guntz remember him, Guntz informed that they are in "Guntzland" and Klonoa cannot tell him what to do. The bounty hunter attacks Klonoa, Popka and Huepow, driving them out of his dream world.

They soon stumbled upon Chipple's dream where the kangaroo is a confident fighter apart from his nice and nervous self. Chipple has no memory of Klonoa and mistakes him as his next challenger in his boxing match. When the group attempts to escape Chipple, he transforms into his monster form and attacks. Klonoa, Huepow and Popka were able to escape back into the dream void, and were transported to a black and white world.

They hear a crying voice and follow it to a stronghold protected by Moos. After defeating the enemies, the trio enter the stronghold and find the source of the cry. It is Lolo who was trapped in a bubble being tormented by a dark lookalike of Klonoa called Nightmare Klonoa. The lookalike mocks her situation as he pretends to be the real Klonoa and cruelly tells her that nobody cares about her.

Confronting his doppelgänger, Klonoa demanded he step away from Lolo as the latter is surprised by his presence and the two Klonoas fight. While this happens, Popka goes to Lolo who is confused by his arrival and tries to get Popka to leave. Popka refuses stating he and Klonoa have come to free her, as she tearfully tells him that Klonoa left and will never return for them. However, Popka points out the real Klonoa who is fighting for her sake as Lolo realizes Klonoa is really back and is overjoyed at his return.

After an intense struggle, Klonoa manages to inflate and temporarily suspend his dark doppelgänger. He liberates a happy Lolo, as she tells her worried friends that she's alright before Klonoa asked what she remembers but she only recalls taking a nap before an invasion, Klonoa soon tells her that she is having a nightmare due to her anxiety and bad emotions eating at her. Hearing this, she briefly worries if they're not really with her but is told by Klonoa that they will return with her after she wakes up.

With this, she begins to wake up while Klonoa, Huepow, and Popka follow her back to reality in Lunatea, unaware that Nightmare Klonoa recovered and was contacted by a mysterious voice.

Lolo wakes to her smiling friends and hugs Klonoa out of joy before she recalls something. The group then fight the army of knighty-nights who were trying to break in. After repelling the Knighty-Nights, Klonoa and Lolo run back in as the enemy report to their superior who decides to handle it.

The High Priestess thanks Klonoa for his aid in stopping the conflict, since they request for reinforcements to counterattack. However, Klonoa gives Lolo the credit for saving the day as she sent Popka to find him and praises her actions, which caused her to get shy and thank him before she states she was happy to have him back.

A sudden storm occurs, as Klonoa and Lolo rush outside the temple where they are confronted by Tenebrae Hue. The villain reveals his goals of conquest and demands Klonoa surrender but when he refuses, Hue then summoned Guntz, Chipple and Nightmare Klonoa to destroy Klonoa... 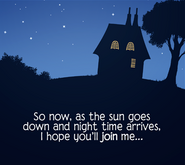 Retrieved from "https://klonoa.fandom.com/wiki/Klonoa:_Dream_Traveller_of_Noctis_Sol?oldid=12528"
Community content is available under CC-BY-SA unless otherwise noted.