The game puts players in the role of Klonoa, who, along with a new cast of friends, has stumbled onto another adventure, this time to save the world of Lunatea and help unveil the mysteries of the enchanted world. The game features gameplay inspired by the original Klonoa with 2D side-scrolling in a 3D-rendered environment.

A remaster of Lunateas's Veil will be included in the upcoming Klonoa Phantasy Reverie Series bundle.

The gameplay of Lunatea's Veil is comparable to its predecessor Door to Phantomile, consisting of standard platforming stages and boss battles, as well as board-riding stages. After a specific point in the game, the player has the option of choosing which stage, or Vision, to play on the game's world map. For most of the game, the player is restricted to a side-scrolling 2D path in a 3D environment, with the ability to move left, right, up, or down. The player can also turn toward or away from the screen to interact with or throw things at objects in the foreground or background. In the standard stages the goal is to reach the end of level by means of using the enemies to overcome obstacles and solve puzzles. Klonoa has a limited amount of health in the form of hearts, which is reduced when coming in contact with enemies and certain obstacles.

In addition to being able to jump, Klonoa can shoot enemies with his signature Wind Bullet using the ring he carries. Once Klonoa has shot an enemy with a Wind Bullet, the player can throw it or use it to double jump by tossing the enemy towards the ground after jumping. There are also special kinds of enemies that are required for progressing through each Vision. These include the enemies called Boomies, which will explode after a certain amount of time and must be used to break certain barricades; Likuries, which absorb the enemies they are thrown at, resulting in them changing color from which point the player can use them to break crystals of the matching color; Erbils that give Klonoa the ability to jump higher than normal; and Kitons enemies the player can use to fly for a short time. There are also jet-like enemies called Jetimos, and large cannons that rocket Klonoa towards distant parts of a Vision. Additionally, there is a feature that lets a friend use a second controller to make the character Popka give Klonoa an extra boost while jumping. Other than that, however, there is no multiplayer mode in this game. Board-riding stages put Klonoa on a fixed, continuously-moving path towards the end goal. Boss battles normally consist of grabbing enemies or objects to throw at the boss until its health depletes.

In each Vision, there are a number of items for Klonoa to collect. For example, Hearts will refill Klonoa's health and Alarm Clocks serve as a checkpoint in the event the player dies. Each Vision, aside from boss battles, contains at least 150 Dream Stones scattered around. The item called the Mirror Spirit temporarily makes each stone worth double its original value. Every Vision also contains six star-like items called Momett Doll Bells Collecting 150 Dream Stones for a Vision will unlock a picture in the game's Scrapbook, while collecting six Momett Doll Bells earns the player a Momett Doll, used to unlock other in-game features.

The game takes place in the dream world of Lunatea. It is composed of five kingdoms. The Kingdom of Tranquility, La-Lakoosha, is a peaceful kingdom that lies at the north of Lunatea and where the High Priestess resides. The Kingdom of Joy, Joliant, is a kingdom to the south of Lunatea and resembles an amusement park. The Kingdom of Discord, Volk, which lies to the west, resembles several metalworking factories. The Kingdom of Indecision, Mira-Mira, is secluded and snowbound all year long. The Kingdom of Sorrow, Hyuponia, was separated from the rest of the kingdoms due to the people of Lunatea forgetting sorrow. Each kingdom contains a bell housing its element. Lunatea has other locations as well. Baguji's Island is a tiny plot of land near a waterfall that is central in the world. Ishras Ark, located in the Lake of Seclusion, is a gigantic ark that serves as the only means of reaching Mira-Mira. 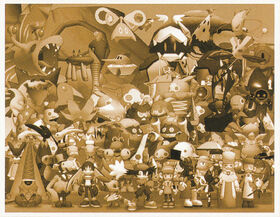 Klonoa - The protagonist of the game is the anthropomorphic creature Klonoa, known by the people of Lunatea as the "Dream Traveler," one who is summoned to save unbalanced dream worlds. He is accompanied on his journey by two residents of this world Lolo and Popka who become good friends of his.

Lolo - A priestess in training. Throughout most of the game, she accompanies Klonoa and provides the energy of Klonoa's ring. She has continuously failed the test to become a full-fledged priestess, but is asked by the High Priestess of the Goddess Claire to aid Klonoa in his journey to save Lunatea. She becomes a good friend of his, though she is hinted to have developed romantic feelings for Klonoa because of his courage and heroism, this seems to implied in the ending.

Popka - A dog-like creature who acts as the rude but charismatic sidekick and best friend of Lolo who also joins Klonoa in the journey while becoming a good friend of his.

Leorina - The game's primary antagonist is the sky pirate and a former priestess who eventually lost her patience and set off to gain "The power of the gods."

Tat - A floating cat-like creature who has the power to split herself into two beings. She accompanies Leorina in for most of the game. She shows a liking to Klonoa at the beginning of the game, giving off a few tips to Klonoa when he is pursuing her.

King of Sorrow - The hidden true main antagonist. As his name suggests, he is the ruler of the Kingdom of Sorrow.

Baguji - The enigmatic prophet who apparently predicted Klonoa's arrival. Early in the game, the trio seek his aid and he directs them throughout the early parts of their journey.

Momett - An unusual resident of Joilant who loves new rides. He rewards Klonoa for collecting Dream Stones and Momett Dolls with pieces of the game's soundtrack in the "Hurdy Gurdy," time-trial versions of bosses, Scrapbook images, and two extra Visions.

The story begins with an unknown silhouette, asking for help. After hearing that, Klonoa suddenly falls into the Sea of Tears . A flying ship, carrying Leorina and Tat appear above him. Before they can take his Wind Ring, Lolo and Popka appear and they fly off, not wanting to risk losing the ring. Klonoa wakes up, and is greeted by Lolo and Popka. They tell him his presence was foretold, and that they should see the High Priestess, and mention that Klonoa is now in Lunatea.

Along the way to meet the Priestess, Klonoa uses the ring, with Lolo in it, to ring the Spirit Bell. Lolo believes she rang it, saying that she can be a Priestess now. After talking with the High Priestess, Lolo is granted the title of Priestess. Klonoa learns he must get the Elements from the giant bells spread throughout Lunatea, but Leorina and Tat manage to get in his way, and take them.

After catching up with them, Leorina explains that with the power she has, she'll make everyone realize sorrow, but instead, she gets cursed by sorrow and turns into a monster. After Klonoa saves her, she decides to help him. With the power of the Elements, Klonoa opens the gate to the Kingdom of Sorrow. It is revealed that the King of Sorrow is the one who summoned Klonoa, in the end however, the king decides to use Klonoa as a vessel for the pain he suffered in isolation, and was killed in the battle with Klonoa.

Before he died, Klonoa promised the King of Sorrow that the world would remember sorrow, saying they've come too far to give up. Klonoa rings the Bell of Sorrow, and the King turns into light and fades away. Sometime later, Leorina and Tat decide to restore the Kingdom of Sorrow, and Klonoa decides it is time to go home. Lolo is disappointed, but tells him it'll be okay because he said it's okay to cry sometimes, and that she'll work hard to earn her Priestess title (it was revealed that it was Klonoa, not Lolo, who rang the bell). She breaks down and hugs Klonoa as he tells her that even though he doesn't belong in her world, they'll always be together, and with a final thank you, he walks away, disappearing to other worlds whose dreams are in danger or back to his own world.

In the credits, it is revealed that the inhabitants of the four Kingdoms in Lunatea are now moving about freely to the other Kingdoms. Most were seen assisting Leorina and Tat in rebuilding the Kingdom of Sorrow, while others were seen exploring the other four Kingdoms with curiosity and wonder. The High Priestess found a reborn King of Sorrow and possibly adopted him, while Lolo and Popka are smiling after Klonoa's leave.

In Japan, Enterbrain released an official strategy guide to Lunatea's Veil in 2001. Another guide was released by BradyGames in North America. Yujin released a 4-inch tall gashapon figure of Lolo and Popka as part of the "Namco Girls" Mini-Figures Series 5 collection.

The soundtrack for Lunatea's Veil was composed by eight individuals. A 2-disc 71 track set was released exclusively in Japan by Scitron Digital Content on August 21, 2002. The score includes the vocal song "Stepping Wind", sung by Klonoa voice actress Kumiko Watanabe in the character's fictional in-game language. Despite this, the guidebook released by Enterbrain contains a Japanese translation for the lyrics.

Lunatea's Veil sold 133,401 copies in Japan during 2001, making it the 85th best-selling game of the year. Famitsu reported that the game sold 45,639 copies during its first week of release in that region. Lunatea's Veil, along with Moto GP 4 and Seven: Molmorth no Kiheitai, were expected to sell a combined 900,000 copies during the release quarter, but only managed to sell 290,000 units together.

Despite its lack of commercial success, Lunatea's Veil met with a very positive critical reception. The game currently has a score of 91 out of 100 on Metacritic ("universal acclaim") and a score of 85% on Game Rankings. 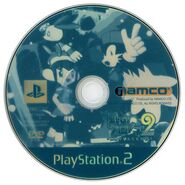