Leorina (レオリナ Reorina), formerly known as Leo (レオ Reo), is a Sky Pirate who first appeared in Klonoa 2: Lunatea's Veil. She is the main antagonist with her sidekick, Tat, but becomes an ally near the end of the game. She returned as a playable character in Klonoa Beach Volleyball.

Leorina appears with a rich, dusky brown skin tone with red hair and blue eyes. She wears a yellow tiara on her head and white gloves, dark blue suit with a belt on waist holding a red cloak, long white boots that matches the color of her gloves, and a red short scarf on her neck.

Leorina is initially very cold and acts quite hostile toward Klonoa, often sending her monsters after him. She was also condescending to Lolo, calling her a little girl and telling that she will be the one to save her world, showing no compassion to the latter.

However, after she was cursed by the power of sorrow, she is much more sympathetic to Klonoa's mission and becomes willing to help rebuild the destruction caused by the final battle.

A red artificial ring similar to Klonoa's Wind Ring which Leorina creates after gaining data of its power.

Because she was a former priestess, Leorina can use her fake ring in the same way as Klonoa's (when his is powered by Lolo).

Leorina's Special Attack in Klonoa Beach Volleyball; after hitting the ball over the net, she summons lighting that strikes and burns her opponents.

Leorina was once a priestess-in-training from La-Lakoosha, once known as Leo. However, impatient in her training, she finally decided to find her own way of gaining the power of the gods without becoming a priestess and left the temple. A few years later, she became a sky pirate and gained Tat as her loyal sidekick.

Leorina was the main antagonist for the majority of the game, aiming to uncover the Kingdom of Sorrow in hope of making everyone share the depression she felt. She encountered Klonoa for the first time near the Bell of Tranquility, needing his ring to make the Bell of Sorrow appear.

In Volk, she created a red artificial ring similar to Klonoa's after gaining data of its power from Klonoa's fight with her monster, Leptio the Flower Clown. Once she stole all of the bells' power of each of the four kingdoms from Klonoa while under the guise of Baguji, she went to the Sea of Tears and used their power to re-emerge the fifth bell of Sorrow there, and gained access to a copy of Ishras Ark that was reawakened to travel to the Kingdom of Sorrow. Leorina was once again encountered by Klonoa within the Embryo Compass, and tried to use her artificial ring on him, but was suddenly overcome by the power of sorrow, transforming her into a large, insect-like monster. After Klonoa defeated her, Leorina reverted back to her normal form. Badly injured from the battle, she realized what she was doing after being consumed by the power she was willing to unleash upon Lunatea. She then sided with Klonoa to help stop the King of Sorrow from consuming the world in sorrow. After the events of Lunatea's Veil, Leorina recovered and was seen with Tat rebuilding the Kingdom of Sorrow with the help of the other inhabitants of Lunatea.

Leorina participated in the Beach Volleyball competition. Becoming the victor, Leorina immediately demanded the prize money from Garlen. He refused in his rage for losing, however, and pulled a gun on her, saying the money was hidden deep within his mansion. Leorina decided to merely steal Garlen's entire mansion and look for the money later. Garlen became flabbergasted at the theft of his house. 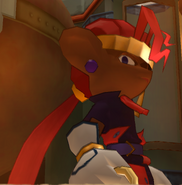 Retrieved from "https://klonoa.fandom.com/wiki/Leorina?oldid=12416"
Community content is available under CC-BY-SA unless otherwise noted.