Little is known about her personality, although it is very likely she cares deeply for the world and its people, since she can renew what was wrongfully done.

Lephise has the ability to save the world with her Song of Rebirth.

Lephise first appeared in the possession of Ghadius and Joka, after a strange ship crashed on top of Breezegale's Bell Hill (in the Wii remake, it was revealed that Lephise was piloting the ship that crashed onto the top of Bell Hill, possibly to escape her pursuers but was knocked unconscious upon crashing). Ghadius then reveals his plans to Joka. Without Lephise awake to sing the song that would bring light and life back to Phantomile, the world would descend into darkness and nightmares which Ghadius aimed to achieve. Ghadius detected the presence of Klonoa and Huepow, and ordered Joka to take care of the 'mice'. He swept Lephise within his seemingly multidimensional cloak and disappeared.

In Coronia, Lephise was briefly seen within the cloak of Ghadius as he explained to Klonoa and Huepow that by using Lephise and the egg of destruction, his plans would come to fruition. After the defeat of Nahatomb, Lephise was freed and she announced that the nightmares in Phantomile had disappeared. At the end of the game, Lephise sung the Song of Rebirth, renewing the world of Phantomile, and in the process, sent Klonoa back to his world.

Balue, at Gunston Mine, made a statue of Lephise as he had a crush on her. Knowing that the Songstress lived in Cress, he focused on building a tower so he could get there and visit.

Lephise was mentioned by Balue as a diva, as he had tickets to her concert when Klonoa came to him for aid. 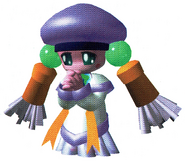 Retrieved from "https://klonoa.fandom.com/wiki/Lephise?oldid=12284"
Community content is available under CC-BY-SA unless otherwise noted.