Moire is the Head Priest of Coronia, the Temple of the Sun, and leader of Solare and Soleil. When Klonoa finds him, Moire was unconscious, having been ambushed by Ghadius and Joka. After he recovered, he feared what the Dark Spirit was planning to do atop the altar of Coronia, and Klonoa responded that he was making his way up the temple to stop Ghadius. Assured that Klonoa would stop Ghadius, Moire floated back to the safety of the temple with the help of his Nagapoko, but not before warning Klonoa of the dark effects of the sun's eclipse in the enemies that laid ahead of him ("The solar eclipse give the enemy power. You must attack them when there is light."). 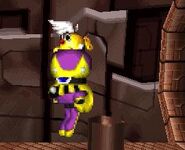 Retrieved from "https://klonoa.fandom.com/wiki/Moire?oldid=12791"
Community content is available under CC-BY-SA unless otherwise noted.