In this game, Klonoa, along with Gantz, appears as an ally to the main protagonists, Rejji and Xiaomu, and aids them in their mission to stop the Ouma organization who, along with villains from other worlds, is trying to fuse the various worlds with the real world. Klonoa is voiced by Kumiko Watanabe while Gantz is voiced by Takahiro Sakurai.

Darkstalker's character Felicia bonds with Klonoa claiming that "long haired felines must stick together" and they both try to do the same with Tekken's character, King, who (as part of a running gag) tries to explain them over and over that he is just a normal human wearing a jaguar mask, and his hair is SHORT. Other characters include, Lolo (who is not voiced), The High Priestess (who is also not voiced), Joka (voiced by Toshiro Furukawa), Janga (voiced by Nobuyuki Hiyama), Moos and Glibz.

Joliant as it appears in the game

Outside the Temple of the Heavens

Klonoa and Guntz/Gantz in a conversation 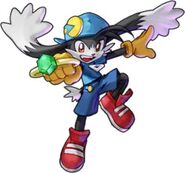 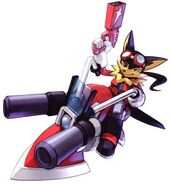 Death-God Fire
Add a photo to this gallery

Retrieved from "https://klonoa.fandom.com/wiki/Namco_x_Capcom?oldid=12666"
Community content is available under CC-BY-SA unless otherwise noted.