Pango is a pangolin-like character who first appeared in Klonoa Heroes. His primary weapons are bombs. After Klonoa and Guntz helped Pango in battle, Pango joins the team and becomes one of Klonoa's best friends. He is also the father of Borris, a child that suffered a hibernation disease.

Pango is usually jovial and friendly to those around him, and is the one with the most sense in the Klonoa Heroes trio. He seems to be very violent when provoked, judging by the mugshot he has when using his special attacks. He makes bombs for a passion, and seems extremely well-read, due to his knowledge of books.

Pango jumps in the air and throws a series of bombs around him.

Pango rolls a series of bombs that explode after reaching certain distances.

Pango starts with red and blue bombs that does not have much power. He gains different types of bombs throughout the game including a mace-like bomb.

Pango first appeared when he raided a prison Klonoa and Guntz were trapped in by Janga with his bombs in The Ruins of the Moon. He joins the team to help his new friends and find a cure for his son's illness. After Garlen's downfall, Pango finds the cure for his son. He has not appeared in any games since then.

Pango still carries his bombs around, and is jovial and friendly as always. Much of Pango's past is unknown. It is implied that he is or has been married, because he has a son called Borris who he attempts to save in Klonoa Heroes. 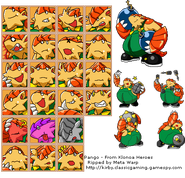 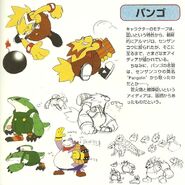 Design process
Add a photo to this gallery

Retrieved from "https://klonoa.fandom.com/wiki/Pango?oldid=11746"
Community content is available under CC-BY-SA unless otherwise noted.