Splits herself into two forms

Tat (タット) is a black and white, cat-like character who first appeared in Klonoa 2: Lunatea's Veil as Leorina's sidekick. She returned as a playable character in Klonoa Beach Volleyball.

Tat's appearance resembles that of a cat. She is black and white and only has one of her yellow eyes open. She floats in the air to move, as she has no legs which are instead replaced by her tail and a strange green ring-like object. She also has blue buttons down the front of her body and long sharp claws.

Tat's personality is very varied depending on her status. In her normal form, she loves to wind people up and she does so on several occasions whilst talking to Klonoa and his friends. Tat also cares about Leorina and is shown to be protective and worried about her after Leorina was brought back to her senses when she was consumed by sorrow.

Her two different forms also have different personalities and have contrasting opinions on Klonoa himself. Her black form doesn't appear to like Klonoa very much, occasionally taunting him and even calling him a "perv" after he catches her on the Jungle Slider (though is should be noted if you catch the white form first, she also calls you a perv). Her white form, however, acts almost the opposite. She refers to him as "darling" at one point at the Joilant Fun Park (to Klonoa's obvious confusion and annoyance) and even helps Klonoa (and the player) to catch her by instructing how to use a Kiton to reach the ledge she's on. However, this could be due to her teasing him.

Tat has the ability split into two forms which are identical to her normal form, apart from that one is completely black and the other is white. She can do this at will, and this makes her difficult to catch.

Tat's Special Attack in Klonoa Beach Volleyball. She calls down a giant cat robot that falls onto her opponents. In Klonoa 2 : Lunatea's Veil, besides having the ability to slit up into two forms, Tat also shown to have the ability to create multiple robotic versions of herself as seen in a mini-boss fight with her in Underground Factory.

Tat has also shown the ability to blast away obstacles as shown in Klonoa pursuit of her in Joilant Fun Park.

After Klonoa entered the world of Lunatea, Tat and Leorina were flying over the Sea of Tears in their aircraft after overhearing the Dream Traveler's arrival and spotted his unconscious form floating in the waves. Tat made a dive for Klonoa to catch him, but she missed when Leorina caught sight of Lolo and Popka on the shore nearby, and were forced to retreat in order to not lose Klonoa's ring.

Tat made her full appearance at the Claire Moa Temple along with Leorina, introducing herself and her partner to Klonoa after summoning a monster, Folgaran. When Klonoa refused to give his Ring, Leorina sent Folagaran to attack them. After Klonoa vanquished the amoured beast, Tat was astonished by Klonoa's skills and called him 'kinda cool' before she and Leorina departed.

Tat later proved to be a nuisance when she swiped the Element of Tranquility from Lolo upon their arrival to Joilant. She then splits herself into two forms of herself, one black and one white, confusing the heroes as they didn't know which Tat had the Element. The two Tats then darted to two parts of Joilant: The black Tat in Jungle Slider and the white Tat in Joilant Amusement Park. If one of the Tats was caught first, she would call Klonoa pesky for pursuing her while being amused when Lolo defends him but hints that she likes him. This lasts until they chase Tat and she will call Klonoa a perv for catching her and he lets her go, but she didn't have the Element. If one of the Tats was caught last, the heroes retrieve the element, and the remaining Tat retreated back to Leorina.

In Volk, Leorina sent Tat to activate the generators to power up the machine powering the Fake Ring she created from Klonoa's ring data. She was encountered in the Underground Factory by Klonoa and Popka and fights them, but was defeated and driven away.

Tat wasn't seen again until Leorina has the Elements in her possession after she disgused herself as Baguji. The cat threw the last Element to Leorina, allowing the Sky Pirate to change the world of Lunatea. After Leorina was overcome with sorrow and was defeated by Klonoa in Embryo Compass of the Ishras Ark, Tat was seen comforting the injured Leorina, not leaving her side. She was seen again, piloting her aircraft and helping Klonoa stop the Ark from reaching the Kingdom of Sorrow, saving him and Popka from the fiery blasts of the overloading generators. Despite doing this, Tat claimed that she didn't like Klonoa for hurting Leorina when she was consumed by sorrow.

In the credits, Tat was seen along with Leorina rebuilding the ruins of the Kingdom of Sorrow along with the other inhabitants of Lunatea.

Tat participated in the Beach Volleyball tournament, along with Leorina. If she won, Tat had Leorina to make a promise she made before the competition started. Later they broke into a mansion where the King of Despair, Bagoo, lived. He saw them and when he looked at Leorina, he couldn't help but giggle. When the pirates leave the house, the players find out that Leorina had to cover herself in blue and white body paint as the promise. 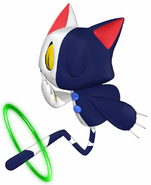 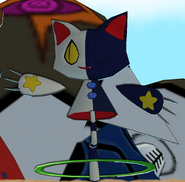 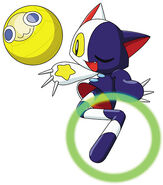 Klonoa Beach Volleyball
Add a photo to this gallery

Retrieved from "https://klonoa.fandom.com/wiki/Tat?oldid=12428"
Community content is available under CC-BY-SA unless otherwise noted.