The High Priestess, known as the "Great Shrine Maiden" (大巫女 Ōmiko) in Japan, is a kind priestess of Goddess Claire. She first appeared in Klonoa 2: Lunatea's Veil as a major character and again in Klonoa Heroes as the one responsible for issuing Hero Medals. Her real name is unknown.

The High Priestess resides in La-Lakoosha and is referred to as "The Current Claire". She is the one who gave Lolo her priest symbol (later of which she had removed) after she rang the Spirit Bell, and she asks Klonoa to watch over and protect Lolo. She also trained Leo before she impatiently abandoned the temple. She possibly adopted the King of Sorrow after he was reborn into a baby.

Klonoa receives his Hero Medal from the High Priestess.

The High Priestess watches the invasion of Nighty-Knights, as the high priestess knows that its to dangerous to win. With this thought, she implores Lolo to leave but the latter refuses to leave her and sends Popka to find help.

She is happy when Popka returns by bringing back Klonoa, who helps in repelling the enemy. She thanked the dream traveler for his act, since it gives them time for a counter move but he gave Lolo the praise due to her actions.

Afterwards, Tenebrae Hue appears in Lunatea and confronts Klonoa, as High Priestess implores Lolo and Klonoa to come back inside. She also agrees with Popka on stopping Huepow from going out to help their friends. 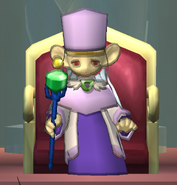 The High Priestess as she appears in Klonoa 2 Lunatea's Veil 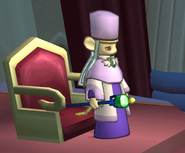 The High Priestess as she appears in Klonoa 2 Lunatea's Veil

The High Priestess in Klonoa: Dream Traveller of Noctis Sol.
Add a photo to this gallery

Retrieved from "https://klonoa.fandom.com/wiki/The_High_Priestess?oldid=11931"
Community content is available under CC-BY-SA unless otherwise noted.